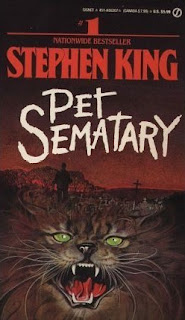 by Stephen King
My rating: 3 of 5 stars

I'm re-reading King's books in chronological order and I was looking forward to this one. I would have been 15 the first time I read this and I remember it being quite frightening; I have no memory whatsoever of watching the movie even though I must have. My memory served me well pretty much recalling the whole plot of the story, but I couldn't remember the ending. Did he actually bury the kid? And what happened then? All that stuff ends up happening in the last 75 pages or so, though.

For the most part, I found the book did not live up to my expectations. The last 75 pages is the good stuff. Preceding that we have a family story, bad stuff happens, this family has psychological problems in dealing with death, but not much happens except for the cat thing. Honestly, that isn't even very scary. The best part is when Rachel describes the death of her sister when she, Rachel, was nine. That is fairly gruesome and terrifying to think about experiencing. The characters just didn't get to me, I didn't really care for them much, except the nine-year-old Ellie. There is no real bad guy or defined evil. There are glimpses and Louis defines it for himself as the Wendigo but the real "bad guy" is simply death itself and I don't think of death as a bad thing myself. These people just seemed so dysfunctional, I couldn't get on their fear bandwagon. So there is the supernatural element of the Pet Sematary but it doesn't turn out all that bad and with no defined "Evil" it was a fairly mundane read. Then suddenly the last 75 pages were a rush. Things went hyper, the Evil came out, all the good stuff happened and a there's a very sinister ending.

I also like to watch for connections to the overall SK Universe while reading and this has a couple. Almost right away we know where we are as someone briefly mentions that a nearby town had an episode where a rabid dog killed several people (Cujo). Next is the appearance of the line "All work and no play make Jack a dull boy" which is from "The Shining" movie not book but must have been a nod in one way or another. (King did not like the movie adaptation) and finally whilst driving a road sign for "Jerusalem's Lot" (Salem's Lot) is passed and the driver feels it must be an unpleasant place. Those are all I noted.
Labels: 1983 death horror Signet Stephen King