Old Sparky: The Electric Chair and the History of the Death Penalty by Anthony Galvin 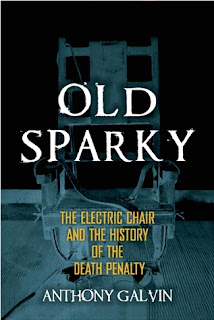 Old Sparky: The Electric Chair and the History of the Death Penalty

by Anthony Galvin
My rating: 5 of 5 stars


An engrossing read from start to finish. The book narrows down its focus quite quickly but does start broadly to illustrate how the author arrives at his premise. Starting with worldwide execution methods throughout history, Galvin quickly travels through medieval and renaissance Europe, then particularly Britain from whence the colonists brought their preferred execution styles with them to the new world. For most of Britain and it's colonies, hanging became the civilized method and was used almost exclusively in the US until a time when Britain was perfecting the method. What was the US to do? Follow Britain again? Was hanging the most humane method of execution? The French had the guillotine, the Spanish the garrotte, and the firing squad has been used in most civilized countries even up to today. But the US went a very American direction and invented a uniquely American device that is associated with the US only, the electric chair. This book then tells the making of, history of, use of, moratorium on, reinstatement of, replacement of by more modern technology, and the possibilities of its comeback. Quite fascinating stuff whether reading about Edison and Westinghouse's quarrels about A/C vs D/C electrical currents, reading about botched executions, prisoner's last meals, or case studies of numerous individuals who ended up in the electric chair.

One thing this book is not, is an argument pro or con death penalty. For the largest part the author presents an entirely unbiased introduction of the facts; he uses a slight bit of gallows humour which is expected in these types of writings. Personally, I am against any form of capital punishment for any reason and yet I found Galvin's writing style informative and entertaining. The last few chapters Galvin does seem to press heavy that the current state of affairs does need change/reform and here he loses his bias as he does lean more one way than the other, but his information is interesting, even if one tempers his statistics as over keen especially as he heavily pushes the innocent quotient. But these are realistic thoughts to be thinking of going forward: 1: the EU's refusal to sell lethal injection drugs to the US; supplies are currently already low; 2) the research data that concludes lethal injection has probably been one of the most painful methods of execution the US has ever used, hanging was more efficient, beheading is most humane; and 3) 1 in 25 death row inmates is innocent of the crime for which they have been sentenced to death. None of these factors affect any change in my own opinions as they are based on my faith which cannot be swayed. The majority of the book though is about the past, that which happened, without any judgement and is an exciting book to read. I read the first whole half in one evening!