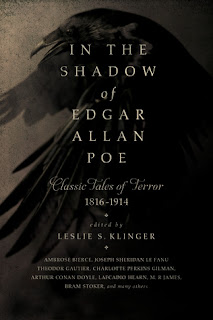 by Leslie S. Klinger
My rating: 4 of 5 stars


A wonderful collection of gothic short stories by authors the editor feels have been forgotten over time as writers of the macabre by falling under the shadow of Poe. A very informative and entertaining introduction is included which gives a history of the "terror" story from ancient times to now with the emphasis being on the latter-half of the 1800s. This is an excellent sampling of Gothic tales of horror from the Victorian era by a wide range of authors. Of course in such collections some stories are better than others, but I found the collection as a whole to be a solid 4-star rating. I had heard of most of the authors, read a good many of them, found some new-to-me authors, but also did not recall having read any of these stories and was particularly pleased to find a couple in the collection that I've wanted to read for ages such as "The Yellow Wallpaper", a classic indeed, that had thus far eluded me. Klinger has done a fine job as editor and this is a highly recommended anthology!

1. The Sand-Man by E.T.A. Hoffmann (1816) - This has all the markings a classic Gothic tale should have, even including a madman, but is quite forward thinking for the times as the man is the innocent, childish, frail one while the woman is the logical, non-emotional one coming up with the reasonable answers to the strange goings on. Hoffman is quite the melodramatic story weaver! (4/5)

2. The Mummy's Foot by Theophile Gautier (1840) - A Frenchman walks into an antique shop and buys an Egyptian mummy's foot. A strange episode ensues. Descriptive to the point of tedium, starts off with pages describing the antique store, then the proprietor before even getting to the purchase then becomes exotic with its descriptions of Egyptian things but, overall, while being a fantastical story pretty boring for today's reader. (2/5)

3. An Account of Some Strange Disturbances in Aungier Street by J. Sheridan Le Fanu (1851) - I like Le Fanu. He's a great writer and very easy to read compared to others from this era. This story is just ok, though. A haunted house story, in which the narrator relates the events which happened to him and a friend when they rented the old manor. The descriptions of the ghost are quite gruesome and it's a nasty thing so I can imagine this being more titillating at the times than it is now, to me. (3/5)

4. The Upper Berth by F. Marion Crawford (1885) - Loved this! Classic ghost tale! Has a bit of everything. A group of men are sitting around having their usual cigars and drinks, telling stories, when our narrator mentions he has seen a ghost. Then he tells his tale, A splendidly gothic, creepy tale taking place aboard a steamer ship crossing the ocean. My favourite so far. (5/5)

5, His Unconquerable Enemy by W.C. Morrow (1889) Oh sweet revenge! He will have it at all costs. Thievery is punished by the removal of an arm, thence revenge steps in. His re-capture turns his sights upon the Rajah who punishes him with the removal of the second arm and so and so on. This is the type of story that can only be read. Visualization would take away the cringeful moments the imagination can create better. (5/5)

6. In Dark New England Days by Sarah Orne Jewett (1890) - Spinster sisters loose their domineering, miserly father as they enter their senior years. Hoping to find they've been left financially secure now that they are free at last, instead the timid sister curses the man (and his generations) who cause them to remain dependent on what they can earn from garden and spinning wheel. A fairly straightforward story, and predictable, but well-written and atmospheric. I really enjoyed it. (4/5)

7. The Yellow Wallpaper by Charlotte Perkins Gilman (1892) - Brilliant story of madness! Fascinating piece for its historical value as Ms. Gilman is protesting the common treatment, at the time the story was written, given to women who were suffering "nervous" disorders. A cautionary tale but extremely frightening because of its reality. Is followed by Gilman's 1913 essay on "Why I wrote The Yellow Wallpaper" (5/5)

9. The Yellow Sign by Robert W. Chambers (1895)- This is a creepy, haunting, otherworldly tale which gets weirder right up to its abrupt ending. One of the best stories in the collection. It leaves you a little baffled; is it ghosts? supernatural? Leaves you thinking. (5/5)

10. A Tragedy of Bones by George MacDonald (1895) - Chapter 17 of the novel "Lilith" - A man out walking in the forest at night happens upon some incidents involving skeletons. MacDonald's work is all very theological and in essence, this is a little tale on the afterlife, taking place in a dream I suppose (I haven't read Lillith) showing the narrator what goes on in Purgatory (or Hell since MacDonald believed Hell was actually more like the Catholic Purgatory). If you don't get the theology going on it's basically just a story of dancing and arguing skeletons. (3/5)

11. A Night of Horror by Dick Donovan (1899) - The classic haunted house ghost story where the ghost is looking for his remains and the truth of his death to be discovered. Well written and very gruesome for the times. (4/5)

12. The Corpse-Rider by Lafcadio Hearn (1900) - This is supposed to be the retelling of a Japanese tale though it's been Anglicized somewhat. The premise of the vengenance of a scorned woman outlasting death is frightful and so is the set-up of the story. But then it plays out to a boring end and let down. (2/5)

14. The Shadows on the Wall by Mary E. Wilkins Freeman (1902) - Absolutely delicious little tale of terror; perhaps murder, perhaps ghosts. Brothers and sisters gather at the family home (they all live there except for a married sister) after the abrupt, sudden death of the youngest brother under suspect, but hardly dared spoken of, circumstances. The suspense and tension slowly mount to a chilling end. Loved it! (5/5)

15. Lost Hearts by M.R. James (1895) - In a strange editorial choice this one story has been placed out of chronilogical order; this being because the story gained its popularity once it was reprinted in a collection in 1904. It would have been better placed earlier in the collection. Going back to the early 1800s this story brings together a practitioner of the dark pagan arts and his newly arrived orphan nephew, only 12 years old. I's easy to guess where it goes from there. (3/5)

16. The Moonlit Road by Ambrose Bierce (1907) - I like this author but this story isn't terribly haunting even though it is a ghost story. Told in three parts we read the testimony of three participants; first the son, then the father and finally the mother (through the aid of a medium). (3/5)

17. The Spider by Hanns Heinz Ewers (1915) - Perfectly splendid! Perhaps my favourite in the collection! Expertly told. Some might, but I wouldn't, call this a ghost story, more a tale of the macabre. A medical student registers himself up in a room whose last three occupants have hanged themselves in rather an unnerving manner the past three consecutive Fridays between the hours of five and six pm. These are the journal entries found in his room in which he did stay longer than the next coming Friday. Haunting and well-written for a story in English translation. (5/5)

18. The Woman with the White Hood by L.T. Meade (1908) - Perfect Gothic ghost haunting. A familiar take today but quite shocking for its day especially for the description of the girl's terror. I enjoyed the female protagonist especially in a story written at this time for her pluck. Of course, she was utterly stricken almost mad with terror before the apparition but she was determined to see the affair through and lay the poor spirit to rest no matter her own suffering. Great story! (5/5)

19. The Easter Egg by Saki/H.H. Munro (1911) - Saki is hit and miss with me and this one was pretty good. A Clovis tale (though he doesn't appear) in which a very weak and nervous grown son has one brief shining moment of half-courage before his mother. Rather macabre. (3/5)

20. The Squaw by Brahm Stoker (1893) - Again an editorial choice to place the story out of order because it was published in a collection for the first time in 1914. Stoker is easy to read though and the story not time specific feels good here as the finishing story. The "dumb" American is over-the-top, but I took him to be intentionally so making one have little feeling for his horrific ending. Quite a disturbing story, violent with a disturbing act by one character leading to a final disturbing act by another. A good story with which to end the collection. (4/5)