I Am Crying All Inside and Other Stories: The Complete Short Fiction of Clifford D. Simak Volume One 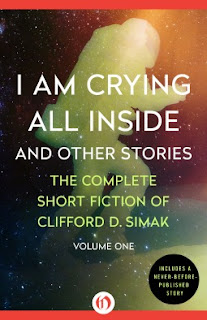 I Am Crying All Inside and Other Stories

by Clifford D. Simak
My rating: 4 of 5 stars

The Complete Short Fiction of Clifford D. Simak (Volume One)

A random collection of stories by Clifford D. Simak, all science fiction except for one western. I really like this author especially his longer stories and novellas of which a few are included here. This is a good mix of short and longer stories. Each story is prefaced with a short intro by the editor explaining when and where it was first published along with an interesting tidbit about its publication and the editor's personal opinion or remembrance. All of the stories are good garnering mostly 4 or 5 stars with only a couple of 3 stars. Simak is an excellent world-builder and his stories are entirely mesmerizing. It also has all the qualities I like in a short story collection with David Wixon performing an excellent job as editor.

1. The Installment Plan (1959) - Excellent story to start the collection with as it immerses us deeply into Simak's world building. A crew of robots and couple of human leaders has returned to an alien planet to conclude a trade deal, only because of bureaucracy, they are 15 years late. They find the locals uncooperative and the planet in a different state than last reported. This has a bit of everything including a mystery. Loved it! (4/5)

2. I Had No Head and My Eyes Were Floating Way Up in the Air (2015 first time in print!) - We listen to the mind ramblings of a man who finds he has been turned into something not human until he discovers one remaining vestige of humanity left to him ... hate. Has a twist ending. I didn't really get into this one as I didn't buy the author's conclusions about humanity since I'm Christian. Ultimately, it all rang hollow to me. (3/5)

3. Small Deer (1965) - A man builds a time machine and discovers the horrible truth of how the dinosaurs became extinct. Written as a letter this is a very fast, short read. Somewhat outdated in its views but, nonetheless, entertaining. (3/5)

4. Ogre (1944) - This is a splendid story of life on an alien planet that I've read before. The race here is plant based and thrives on music. Quite an adventurous tale as beings on both sides plan to conquer Earth. I absolutely love the world-building and alien beings in this one.(5/5)

6. Madness from Mars (1939) - An early story and one Simak himself didn't like. However, I thought it was a great story of space travel from the era and the consequences of bringing back an alien animal. (4/5)

7. Gunsmoke Interlude (1952) - This is a short one and a western. Though famous for sci-fi Simak wrote other genres. It's a good redemption story, but I didn't like the smart alec kid who is the redeemer so it fell flat on me. (3/5)

8. I am Crying All Inside (1969) - Whoa! This is short but very powerful. A story of false pride. At first, it sounds like a slave talking about his "people" and the elegant "folks" who live in the big houses, but that is not what is going on at all! Compelling. (5/5)

9. The Call From Beyond (1950) - A novella. I love Simak's longer pieces as they are totally engrossing. His world building is amazing. A team of scientists had secretly been sent to Pluto to work on secret biological human mutations, but three years in had sent an emergency message that all hell had broke loose and the last man was killed during the report. There was a government cover-up, ban and quarantine on Pluto. Our hero comes to Pluto thinking he can come live as a recluse from Earth and be left in peace but finds things are not as he thought they'd be. The story turns into an interesting dissertation on "mutations", not physical but neurological. It's quite interesting in light of today's scientific research and opinion of neurological conditions such as Asperger's which in this story are considered mental mutations and the public's reaction and government's handling of these so-called mental mutants. A page-turner! (5/5)

10. All the Traps of Earth (1960) - The final story in this collection is another long one and again a deep story. Instead of world-building, this story concentrates on character and follows the predicament Richard Daniel, a six-hundred-year-old robot, finds himself in when the last member of the family he has faithfully served all these years passes away. Illegal for a robot to keep the same life memories for more than 100 years Richard rebukes his imminent memory washing and sets out to find a life free of Earth's rules. An exploration of the humanity of a robot. Excellent! (5/5)