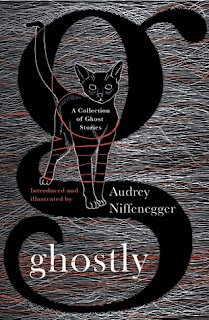 Ghostly: A Collection of Ghost Stories

edited, illustrated & introduced by Audrey Niffenegger
My rating: 3 of 5 stars


A varied selection of ghost stories from Victorian era through to modern day authors. The spooky ghost theme is consistent throughout the collection though sometimes the reader is left with deciding whether it is a story of the paranormal or madness. The writing, however, varies widely from Gothic to humour to horror to simply odd and so on making it a decidedly inconsistent anthology. Overall, I found the selections mediocre, some better than others, a few great, but more than a few less than good. There were some I'd read before and the older ones were my favourites. There were classic stories by Poe, Oliver Onions and M.R. James but surprisingly my favourite in the entire collection was a modern story by a new-to-me author, Kelly Link. Almost all the older authors I've read before, if not these specific tales, but I just wasn't wowed by their representative stories. They have so many much better titles to choose from. Certainly not one of my favourite anthologies, but if you haven't read any of these authors before they are worth reading.

1. The Black Cat by Edgar Allan Poe (1843) - I've read this many times and reviewed it before. Quintessential Poe with many of his oft-repeated themes. The cat episode never fails to get at me. A little iffy as to whether it is a ghost story, though. (5/5)

2. Secret Life with Cats by Audrey Niffenegger (2006) - Ok this is certainly freaky. Freaky in a weird way and puts an entirely new spin on the idea of the crazy cat lady. Fun to read but the ending didn't seem to fit the character. (3/5)

3. Pomegranate Seed by Edith Wharton (1931) - Gahhh! This was decidedly dull with an incredibly predictable melodramatic ending. (2/5)

4. The Beckoning Fair One by Oliver Onions (1911) - The collection's novella, this is a very long story. I haven't come across this author before but I'll be sure to look out for his name from now on. Very satisfying story that has us thinking all over the place. Either a ghost story or a descent into madness with a completely shocking ending that took me by surprise. The ending really makes the story worth the read. (5/5)

5. The Mezzotint by M.R. James (1904) - Oooh! Spooky! I loved this and the writing. James is a wonderful writer from this period. A man receives a picture and every time he looks at it, it has changed. Very creepy when he finds out the history of the engraving. (5/5)

6. Honeysuckle Cottage by P.G. Wodehouse (1925) - The intro to this story says it's funny but I'm not a huge fan of Wodehouse and found the story a bit insipid and silly rather than ha-ha funny. A dyed-in-the-wool bachelor writer of mysteries inherits his romance writer aunt's house and finds it haunted by the spirit of wholesome head-over-heels love stories. Readable enough to keep my attention, though. (3/5)

7. Click-Clack the Rattlebag by Neil Gaiman (2013) - Fast forward to modern times and here is a very short creepy story from Gaiman. It's certainly creepy enough but the pov it's written from isn't possible if we're to believe the intended doomed ending. I'm not big on Gaiman. (3/5)

8. They by Rudyard Kipling (1904) - A man drives upon a secluded manor with a large garden of fanciful topiaries and spies assorted children. Then he meets the young, beautiful blind mistress of the estate. Quite haunting though overly sentimental. (3/5)

9. Playmates by A.M. Burrage (1927) - Well-written though fairly straightforward 'nice' ghost story. A lonely young girl is raised alone by her elderly guardian, they move to an inherited old house and her usual glum manner eventually brightens up. Her guardian and the housekeeper think she has made up some imaginary friends but we, the reader, can figure out what these so-called friends really are. (3/5)

10. The July Ghost by A.S. Byatt (1982) - A man rents upper rooms from a married woman and soon learns he is the only one being visited by her 11yo son who was killed in a traffic accident two years ago. This was just boring. (1/5)

11. Laura by Saki aka H.H. Munroe (1914) - Saki is hit and miss with me; usually a miss and this was one of those. A woman is on her death bed talking about how she supposes she will be reincarnated as an otter. Of course, she does. The humour falls flat on me and I just found it stupid. (1/5)

13. The Specialist's Hat by Kelly Link (1998) - This is a new-to-me author and I found this a spooky ghost story. It is a babysitter story and I admit to enjoying creepy babysitter tales. This one runs counter to your usual bb-sitter horror, and because of that is indeed a unique twist and haunting tale that slowly reveals it's rather unexpected ending. Probably my favourite in the entire collection. (5/5)

14. Tiny Ghosts by Amy Giacalone (2015; previously unpublished) - This is just silly, but I guess the moral is not to let anyone push you around. (2/5)

15. The Pink House by Rebecca Curtis (2014) - A woman tells a gathering of writers and painters an obscure true ghost story which happened to her over a period of seven years. At the end, the listeners tell her what they think of her tale, which isn't much at all and I felt the same way. Strange, but in a "why bother" way. (2/5)

16. August 2026: There Will Come Soft Rains by Ray Bradbury (1950, orig. "April 1985") - A haunting, tale that tells the last day in the life of an automated house that survived the nuclear apocalypse. Chilling. It is dated, though, and changing the stories time-frame date from 1985 to 2026 doesn't fix that. I can take the piece more seriously as intended, from a Cold War perspective. I'd give the original 5 stars but give the edited date version four. (4/5)