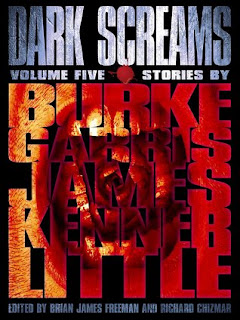 
I've read all the books in this series and found this latest offering the most disappointing. All the stories included are originals for the book, or at least the copyright doesn't say any different. The crowning glory of this series has been the inclusion of at least one (sometimes two) old reprints by classic authors such as King, Straub or Barker. This book fails to carry the scope of the previous four books by including five authors I've never heard of and not one of them stood out as must read author to me. Though the stories improved starting with the worst and saving best for last. I'm hoping the next book will return to its previous format and include a proven successful reprint as a feature story.

1. Everything You've Always Wanted by Mick Garris - Hmmm ... I'm not really sure what to make of this. It's gory, dark, very sexual. Not something that particularly entertained me but kept me reading. The climax was unexpected, a bit silly and ultimately disappointing. (2/5)

3. Mechanical Gratitude by Del James - A man's love for his '68 Camaro and his wife, married the same year. The story has a bit of a "Christine" feel to it, but it's the wife who does the ultimate deed to protect man and car. Pretty good until the weird ending which kind of ruined it for me. (3/5)

4. The One and Only by J. Kenner - A creepy little ghost story. Southern gothic with just a touch of voodoo to add to the atmosphere. By far the best story in the book. (4/5)

5. The Playhouse by Bentley Little - A wonderful story to end the collection with, I found this even better than the last. A disturbing tale which never really lets you in on the secret. Is the playhouse haunted? Have the inhabitants died? Entered another dimension? The strange events keep you guessing, but one fact is clear, a couple of real estate agents are playing with (or being played by) time itself. Spooky. (5/5)