A Day No Pigs Would Die by Robert Newton Peck 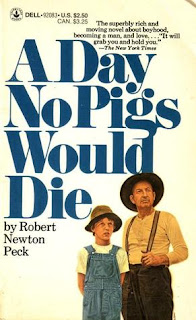 A Day No Pigs Would Die

by Robert Newton Peck
My rating: 5 of 5 stars


The last chapter had me choking back the tears. I read this book probably in about Grade 5 and from there went on to read all Peck's books. This is my first re-read and I can see why it affected me so much at the time and I also see that it began a long-lasting relationship for me with this type of literature. I'm still drawn, today, to books about farm people, mountain people, uneducated folks, living off the land, living plain and simple. And books that end with sadness and people dying, books that some would call depressing but rather I see the redemption that will follow after the book has been closed.

This is Peck's first book and is autobiographical; he even uses his and his father's own names for the characters. Set in 1920s Vermont it opens with a violent, brutal first chapter involving a cow birthing gone wrong and the main character being injured. The rest of the book follows suit. This book is very real where the animals are concerned and gets banned or censored regularly by animal rights activists making it a good choice for Banned Books Week. I just love the rawness of this story, the love of this simple family living off the land, the Shaker ways they try to uphold and the plainness of the language. It makes me want to re-read all Peck's books again from the 70s and 80s and read all the new ones I haven't read. I see a sequel was written in the 90s. One certainly isn't needed, but it will make for an interesting read to find how Robert's next year on the farm fares. This is a keeper for my shelves, but I'll have to scout out for the hardcover edition I remember from my 70s childhood.