The Night of the Long Knives by Fritz Leiber 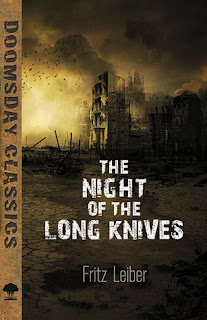 The Night of the Long Knives

by Fritz Leiber
My rating: 3 of 5 stars


Written in 1960 this post-apocalyptic novella is sent during the fall-out of a nuclear bombing. The book has a western gunslinger feel to it as we follow the three characters through the Deadlands, the name given to the majority of the wasted, uninhabited land left on Earth. The three are Deadlanders, people with a natural urge to kill who spend their lives murdering others they find out here. Even though the book certainly comes from the Cold War era it's not a dated read at all. The story deals with many human characteristics and emotions which could be of great discussion. I didn't find it particularly thought-provoking myself though and the naive suggestion of a future promised land was a hokey ending.