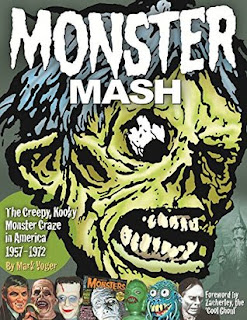 by Mark Voger
My rating: 5 of 5 stars


Fantastic social history of the pop culture of monsters during the sixties covering every form of media from TV and films to print and music to merchandise. A wealth of information on any topic imaginable, jam-packed with photographs and illustrations. The book's graphic layout is in a magazine style with a high focus on images yet the text is very meaty and there are many interviews with all sorts of people from actors to editors. Presented in a chronological format starting with the first TV showings of old 30s/40s monster films in 1957 but also topically such as sections on monster music, Addams Family, TV movie hosts, Aurora and other model kits, comics, etc. I found the book absolutely fascinating both for the text and the trip down memory lane looking at the pictures. I didn't actually grow up in this era but experienced it during the mid-seventies onwards via re-runs and afterschool monster movies. Picking up all sorts of toys, books, comics, etc at garage sales and flea markets. An extremely well put together volume and like any book from TwoMorrows also high quality deserving a place on a collector's bookshelf.