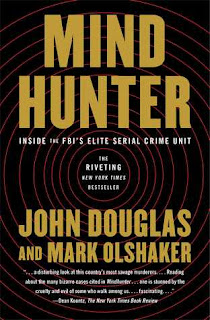 by John E. Douglas & Mark Olshaker
My rating: 5 of 5 stars

Fantastic! Criminal profiling is one of my main interests or hobbies if you want to call it that and this is like the classic primer. John Douglas is the man who coined the term "profiling"; he didn't invent it, but he basically started the modern science we know today. I didn't learn anything new about the psychology, but this was fascinating from an historical point of view as a memoir and a history of the BSU and the FBI itself. Douglas joined the FBI when Hoover was still the Chief and if you know anything about those times you'll know J. Edgar thought the "soft" sciences were a bunch of b.s. and a small clandestine group was working behind his back quietly using psychology on an inquiry-based only system and this is where Douglas first found himself. However, the book starts with Douglas' birth, childhood, college drop-out, military service, etc. before it even gets to his enrollment in the Bureau. I enjoy memoirs and found his writing style highly readable, relishing the book from the get-go. Then, of course, I became fascinated when Douglas turns to his work in the FBI, relates how profiling worked its way into being a legitimate technique, his famous study of interviewing living serial killers to find out how they thought and his work on famous cases including everything from The Trailside Killer, The Atlanta Child Murders and The Tylenol Murders.

Douglas has earned himself some controversy over the years; some people find his writing style arrogant. This is the only book I've read by him but I've got its sequel on hold at the library already! so it won't be my last. Obviously I didn't find him arrogant in the least and his serial killer interviews (conducted with two others) are admittedly a giant breakthrough that even his detractors cannot dismiss.