The Ape's Wife and Other Stories by Caitlín R. Kiernan 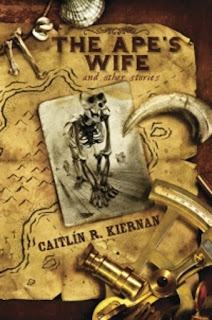 The Ape's Wife and Other Stories by Caitlín R. Kiernan
My rating: 3.5 of 5 stars

This is my first time reading this author and I will certainly come back for some more. This is a collection with no theme except perhaps the themes weird and bizarre. These stories are dark, noir, strange, weird, odd and cover a cross section of genres such as steampunk, noir mystery, fantasy, science fiction, historical fantasy and paranormal alongside those that defy being classified. I found some of the stories absolutely brilliant while some didn't quite do it for me, but even those where I didn't "get" it or the ending didn't wow me I will say the writing did genuinely entertain me. Kiernan is a talented writer of the macabre and this first dip for me was overall satisfying such that I'll keep my eyes out for another of her anthologies. I'm not sure she could hold me for a whole novel though as the sex scenes are too graphic for my tastes bringing the book to an actual 3.5/5

1. The Steam Dancer, 1896 (2007) - A haunting character study with beautifully atmospheric, lyrical writing. Steampunk set in a late 19th century "wild west" type of town. A woman saved as a nearly dead orphan is fixed-up by the funds of her saviour with steam appendages and an eye, they marry and she, of her own choice, goes to work as a stripper. No plot, simply the self-confident woman reflects upon herself. (4/5)

2. The Maltese Unicorn (2010) - Wow, this one covers a lot of genres in one go. Starting out as an historical noir mystery set in the 1920s it eventually turns into a lesbian paranormal erotica while keeping up a gangster appeal only the *gangsters* are demon brothel madams. Not exactly my type of thing but a good story nonetheless that kept me reading and an ending that is abrupt and surprising. (4/5)

3. One Tree Hill (The World as Cataclysm) (2012) - A scientific journalist is sent to investigate whether there is anything in an old story of a tree on a hill which was hit by lightning a long time ago "out of blue" without a storm. I believe she is a woman, though I never was quite sure, becomes wrapped up in this mystery and narrates the story by first telling us she has no idea whether she is awake or asleep or that it even matters. A haunting story that really makes one think, not entirely sure of its meaning; though there is certainly symbolism with the Tree of Knowledge, the Serpent and the fires of Hell. Another sex scene which I guess I'm going to have to expect from this author's work. Compelling writing! (4/5)

4. The Colliers' Venus, 1898 (2008) - Whoa! I can't even begin to coherently summarize this one. It is mind-blowing! Historical fiction set in a mining town turns paranormal as live creatures are said to be coming from stone. Flashbacks make the story appear to be perhaps steampunk, or are they only dreams? Then comes an entity, a female, dangerous, murderous even but is she a threat? Haunting. (5/5)

5. Galapagos (2009) - Very different from the other stories, this is pure science fiction. An only survivor of some strange incident is writing what happened to her psychiatrist and we gradually learn what happened as the story progresses but don't fully comprehend until the last page. The main character makes an issue of being a lesbian and that may have some meaning to the story I don't get. However, getting the point or not, it's a brilliant story! (5/5)

6, Tall Bodies (2012) - A very short story has a reclusive woman talking about the creatures she can see around her. She's an unreliable narrator we find out as she lets us know she was asked to retire from teaching because of an incident that would be called criminal if she were male. Weird story. (3/5)

7. As Red as Red (2009) - Truly enjoying these stories! This is a narrative where not much actually happens but our narrator makes a discovery. She's an academic doing a thesis on the 18th-century fad of unearthing graves and desecrating the corpses because they were thought to have been vampires. A quiet but brooding horror story. (4/5)

8. Hydraguros (2010) - This is an interesting, well-written story, but I didn't understand it. The perspective switched from reality to dream sequences and I don't know what was real or not nor the meaning of the story. It also included way more sex than I'm comfortable with. (3/5)

9. Slouching Towards the House of Glass Coffins (2011) - Probably my least favourite story at this point. Science fiction set on Mars and written in the vernacular of this future time and place making it an awkward read. Difficult to get into but easy enough to fall into the rhythm eventually. Basically a woman's thoughts as she takes a journey across the inhospitable planet to rescue someone stolen from her town, a regular occupation of this group. The ending is ambiguous and one must decide how they think it ends. Only meh for me (2/5)

10. Tidal Forces (2010) - Weird. The narrator tells the events that occurred when her girlfriend was hit by what appeared to be a large shadow coming from the ocean into their garden. An unsatisfying ending. (3/5)

11. The Sea Troll's Daughter (2010) - A longer story than the others, this one is a hero fantasy that tells the tale of a drunken female warrior who slays a troll for a village. The story starts with the slaying and is more about what happens afterward to three women: the warrior, a barmaid, and the troll's daughter. Well-written but predictable. (3/5)

12. Random Thoughts Before a Fatal Crash (2011) - Very strange story! Very long. I didn't like it at first, but it grew on me as it went along. Written as a series of journal entries this is an artist tormented by demons, personal and literal. He perhaps has had paranormal encounters; it is unclear but possible. His art is literally of demons. We only know of his current piece whose subject is a bird-headed man but his previous work is alluded to also portray demons. Personally he is a loner, comparing himself to the people who live in Paris' subterranean sewers and he hires boy prostitutes for sex. He receives letters from an ex-lover which he finds torturous. The sex was graphic and bothered me. The writing was almost a stream of conscience and didn't seem to be about anything in particular though the journal entries did eventually reach a destination and a final conclusion. Not exactly my type of story but well worth reading for the experience. (3/5)

13. The Ape's Wife (2007) - The titular story and about as long as the previous one sets a good tone for the final story. This is about Anne Darrow and the making of the movie King Kong. Anne Darrow is the girl Kong falls in love it. Anne tells us what happened to her after Kong's death. In a dreamstate we see several possible outcomes for her life; it's not until the end we really understand the final outcome. Not rivetting but yes, engrossing. (4/5)