Pardon My Hearse: A Colorful Portrait of Where the Funeral and Entertainment Industries Met in Hollywood by Allan Abbott & Greg Abbott 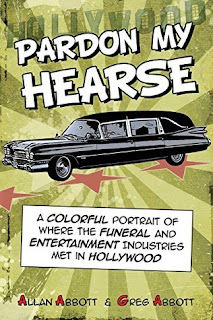 Pardon My Hearse: A Colorful Portrait of Where the Funeral and Entertainment Industries Met in Hollywood by Allan Abbott & Greg Abbott
My rating: 4 of 5 stars

My interest in reading this book is because I'm fascinated with the funerary business and practices. The book's claim about Hollywood was only slightly intriguing to me. I thoroughly enjoyed the read but will mention to prospective readers that this book is not a trashy, gossipy book about Hollywood and celebrities; it is a book about the inside workings of a funeral business which happened to be in California and thus crossed paths with the film industry occasionally. The book starts off chronologically telling the story of how Abbot & Hast, two high school graduates in the early fifties got started in the hearse business and eventually became one of the most respected mortuaries in California along with being the owners of the industry leading trade magazine "Mortuary Management". I enjoyed this biographical part the best. Then the book slips into anecdote mode with each chapter being on a theme: cremation, humour in the industry; embarrassing moments, cultural traditions, etc. There are also chapters devoted to some of the momentous Hollywood funerals they were a part of such as Marilyn Monroe and nefarious events they ended up being a small part of such as sicko David Sconce murdered a good friend of theirs and tried to murder (or at least beat up) Hast. A lot of highly interesting information, mostly about the business, which I enjoyed because of my interest in it. Allan tells things in a fairly straightforward manner with a dash of dry humour. His tone doesn't change between telling about the details of embalming, the details of a prank (which there were many) or his inside information on a conspiracy theory. Because of this I sometimes wondered if he was a bit overdramatic himself but on the other hand he tells them mundanely enough without sensationalism. Glad to have read it and am adding it to my collection on the topic.