Fear of Our Father: The True Story of Abuse, Murder, and Family Ties by Lisa Bonnice & Stacey M. Kananen 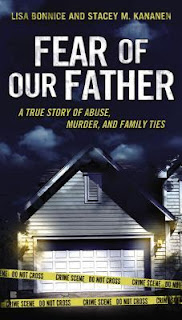 Fear of Our Father: The True Story of Abuse, Murder, and Family Ties by Lisa Bonnice & Stacey M. Kananen
My rating: 4 of 5 stars

For the most part a riveting read of a sick and twisted abusive father who gets his and then the stunning trial of the daughter accused of murdering the mother. Stacey Kananen presents her own story of her life from her abuse at the hands of her father and the daily nightmare living in a household held hostage by his violence to the trial where she was accused by her own brother of co-plotting and committing the murder of her mother. Separating the book into thirds it was the middle portion that I got bogged down in, as the authors used a clumsy method of non-linear storytelling jumping around from telling Stacey's life story from childhood to the unravelling of the police case in the disappearance of her mother and her brother's confession to murdering their father. This read as if Stacey were just telling things as they came to here no matter what order. The first and, especially, the last part of the trial were engrossing reading and Stacey is a remarkable person who suffered and survived an horrific life.