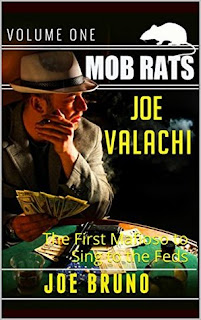 This is my second of Joe Bruno's books and will certainly not be my last! It's been ages since I've read about the mafia, but it was an interest of mine at one time. I'd never heard of Joe Valachi and found this book riveting. Active from the twenties to early 60s when he was finally caught, Joe "Cargo" Valachi was a mobster in New York during the heydays of the big names. This is a short book, so not very in-depth, but gave me a good look at this man's life and insight into the underworld from a member's own point of view. Bruno relies on several sources but quotes Valachi himself extensively from his own memoirs, written while in prison. Joe Valachi, while certainly not admirable nor his actions condonable, does come across as a likable, genuine person throughout the book. Someone you may have liked, despite what he did for a living. I've got a yen on now for this time period 1920-1950s and may be sticking my nose in some books pertaining to the mob scene.