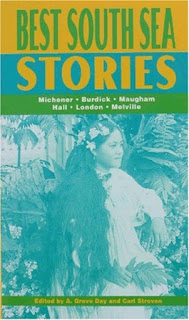 
An incredible collection of stories set in the South Seas written by men who lived in and loved the area with a passion. The stories are, for the most part, written in the late 1800s/early 1900s by some of literature's all-time great writers. and contain first-hand knowledge whether presented in memoir or fictional manner. The only flaw with the collection is that the collections theme is so narrowed in topic that many of the plots are identical and this does become monotonous when taken as a whole. I read one story a day but did take a breather halfway through after the RLS novella to come back fresh with my mojo back in order.

A. Grove Day is a well-known name in Australia, and I used to have several school history texts of the nation written by him. Hr's an excellent editor and this collection is a fine example of his skill. Each story begins with a biographical introduction relative to the story being presented and sets the reader with choice background information before reading.

1. Red by W. Somerset Maugham (1921) - A man goes to an island to escape the authorities and falls in love with a native woman. A few years later he disappears, his fate guessed at. Sometime later a dying man comes to the island for the air and feels rejuvenated; he also falls in love with a native woman. A sea captain comes ashore and this last man, now 25-years later, tells the captain the two love stories. On the surface, this is a story of love but is really passion mistaken for love and the true story is about the end of the passion and the falling out of that mistaken "love". Maugham is a beautiful writer. A cruel story, one that sees through the facade of mistaken feelings one claims are intimate "love". (4/5)

2. The Fourth Man by John Russell (1917) - Four men on a raft with a twist. Three of them are escaped convicts, the fourth is a native hired to take them to an awaiting ship. Ultimately, this is a tale of class more than of race. The three convicts are white and assume they are of the superior race while they ignore the inferior, almost less than human dark-skinned native island. But the convicts themselves are class conscious, one is a garotter, a lowborn common man from the docks, the other two gentlemen, one superior in worth and a doctor. Yet they were all (the white men) sentenced to hard labour in the mines of a penal colony on a south sea island. Brilliant story of inborn class perceptions of the time, the true measure of each man's intelligence and a fitting twist ending. (5/5)

3. The Forgotten One by James Norman Hall (1926) - A dismal, atmospheric story. A man makes a return journey four years later to visit a man he briefly met who was on his way to living on a deserted island. This man tells us of his visit in retrospect. It's really up to the reader to make sense of the events and the actions. Without saying too much, my take is that being in solitude wasn't all he had imagined and he's suffered from it: spiritually (his loneliness), physically (his ironic ailment) and by the end we can presume mentally (his act of madness). Brilliant writing but the story didn't quite capture me. (4/5)

4. The Seed of McCoy by Jack London (1911) - A descendant of one of the mutineers from "The Bounty" goes aboard a ship whose hold is on fire and pilots it through the dangerous island waters until they come to an island with a beach where they can bed the ship and hope to save the hull. Quite a long story where not much happens except the sea voyage and various dangers such as tornadoes, storms, and currents sending them off course. But London is a master writer and I love his stories. This is more a story of the man, McCoy, and how his gentle nature calms and soothes the rough and rowdy crew and officers. (4/5)

5. Mutiny by James A. Michener (1947) - This story is taken from "Tales of the South Pacific" which I haven't read, but I have read plenty of Michener's novels. Set during the war, an airfield must be built on an island currently inhabited by the descendants of "The Bounty" mutineers but to do so a majestic column of pine trees must be destroyed. Naturally, the island natives are set against this and the story proceeds from there. Lovely written story but I ended up disappointed with the syrupy ending. (4/5)

6. The Black and the White by Eugene Burdick (1961) - A young Frenchman leaves for Tahiti to escape the hypocritic, pretentious, evil life of the Western world. Now 30 years later we learn what he had to give up for this paradise island and the reason for the secret life he now leads to remain here. An unsettling story even though I don't agree with the philosophical conclusions. (5/5)

7. The Ghost of Alexander Perks, A.B. by Robert Dean Fitsbie (1931) - Obviously a ghost story. Ghosts are good luck for a ship but are also omens because, like rats, they leave a doomed ship. This is the story of the old ship "Pirara", how it got its ghost and its demise. Just ok. (3/5)

8. The Beach of Falesa by Robert Lois Stevenson (1892) - I'd say this is the centrepiece of this collection. More of a novella than short story coming in at five chapters. An easy read with an adventurous plot and exotic location. However the story, written while Stevenson lived on an Island, married to a Polynesian woman, two years before his death, concentrates more on the realistic relations between the races at this time, colonialism, mixed-marriage, "half-caste" children and the truth of this kind of society versus the romanticism Stevenson felt had been written about the island people up to this point. (5/5)

9. A Son of Empire by Lloyd Osbourne (1921) - A tidbit of information I did not know; this author is Stevenson's son-in-law. This tale is more of a dark farce than a serious yarn. It's short, but the writing style is incredibly hard to read. Some sentence structure is either very bad or very old-fashioned amounting to long complicated incomplete thoughts. I didn't enjoy reading it nor did I find it had much of a plot other than a man arriving on a small island to announce he has been sent by the queen to annex it for Britain; of course there is a twist. However, I didn't like this at all. (0/5)

10. A Prodigal in Tahiti by Charles Warren Stoddard (1873) - Beautifully written and lyrical. A lovely atmospheric tale to read. However, like other stories in this collection, the plot consists of a white man discussing his time in the South Pacific. He comes with grand ideas, realizes he is one of many colonials with the same ambitions and ends up working drudgery for room and board only. He later leaves 'civilization' and wanders around the native land finding he fits in better with the natives and feels superior to the white man but this only, eventually leads to his continued poverty and return back to the States. Not much of anything actually happens but a realistic look at Victorian life in Tahiti. (4/5)

11. Assignment with an Octopus by Sir Arthur Grimble (1952) - This is a short one and by all accounts appears to be a true account of the author's introduction to octopus 'fishing' with the islanders, native-style. (4/5)

13. The Whale in the Cave by Frank T. Bullen (1899) - A bit different from the others, this is an excerpt from the author's book which, while not a short story, presents as one. As the last two stories, this is from the author's true account of his voyages. Supposedly an adventure, I found the death of the whale rather a sad event. Lovely descriptive writing, even though dull in regards to any plot. (3/5)

14. At a Kava-Drinking by Louis Becke (1894) - Whoa. This is more than just a pacific tale. A taught, suspenseful tale of a man sitting 'round a fire drinking kava telling a story which soon becomes clear is his own. Very engaging, quick-paced with a powerful ending. (5/5)

15. Norfolk Isle and the Chola Widow by Herman Melville (1854) - Exceptionally beautifully written morose and melancholy tale narrated by a ship's crewman of the rescue of a widow abandoned on a deserted isle. Having been deserted by the ship that promised to return for them, then losing her companions, husband, and brother, to the sea, the woman tells her lonely determined faith fueled six months of survival. Decidedly depressing but exquisitely written. (5/5)