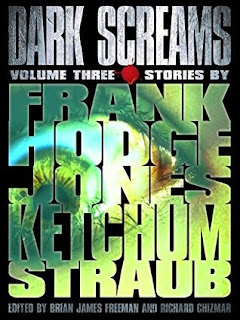 
I love this little horror anthology series from Hydra and this is my favourite volume to date. Just one reprint, and it is only a few years old. The rest are new for this collection. All the authors presented are accomplished writers in their fields, no newbies here. I had only read two authors previously: Straub and Ketchum, of course. But my top favourite stories came from the two female authors included.

1. The Collected Short Stories of Freddie Prothero: Introduction by Torless Magnussen, Ph.D. by Peter Straub (2013) - This is a fictional collection of weird creepy stories written by a boy from age 5 to almost-9 when he was found mysteriously dead in a field. The stories are prefaced by a follower of Prothero's work giving some insight into what has been thought to be mystical, and genius literature. It's all pretty creepy and several ideas went through my mind as to what may have been behind all this. (4/5)

2. Group of Thirty by Jack Ketchum (2015) - Vey good! I thought I knew where this was going from the start but was only half right, well really only in a general way. Ketchum took it into a different direction and the tension builds until the end where the main character, an anti-hero in his own way, gives a big "gotcha". Kind of funny too. (4/5)

4. I Love You, Charlie Pearson by Jacquelyn Frank (2015) - Whoa! Creepy, freaky! Teenage, weirdo stalker guy is obsessed with the gorgeous cheerleader and devotes himself to knowing her and planning for the day he brings her home. When he finally does ... wow ... things take a horrific twist. (5/5)

5. The Lone One and Level Sands Stretch Far Away by Brian Hodge (2015) - I found this one totally fascinating because of the themes. A young city-dwelling couple has a strange woman perhaps five years older than they move in upstairs. She is obsessed with the-end-of-the-world, introduces the husband to Parkour and urban exploring, which the wife eventually joins in also. Just an interesting, well-written story till near the end when it turns way-out weird and creepy! (4/5)