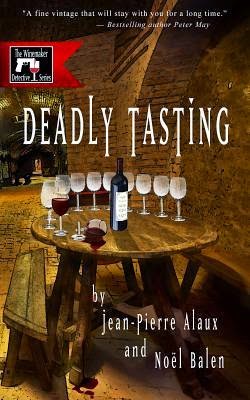 I have been reading this series and quite enjoying it but have to say I was quite disappointed in this one. First, I did like the mystery. It was a neat serial killer puzzler which was described as gruesome but still kept a cozy as no details were given. The problem was there was way too much history packed into this tiny novel that the story suffered from it. I'm already fond of Benjamin and Virgile, but the book didn't allow for their lovable characteristics to come forward. I read a lot of WWII history so know about Vichy France, yet it felt like the book went into history teacher mode; this has been translated into English so I'm sure this information would have been elementary to the original audience and was just tedious for me. I kept wanting the lesson to end and them to get back to the mystery and comradery between Benjamin and Virgile. One thing that is established with this volume though is that the Inspector calls Benjamin in to work on the case as an expert and his prowess as an amateur detective is acknowledged. I think this will set him up nicely for continuing to keep poking his nose into police affairs for the rest of the series. I do not recommend anyone start with this as your first introduction to the series though. Hoping the next one gets me back in the mood for Cooker and his wine, cigars, and vintage cars.