Julius and Ethel Rosenberg - Spies or Scapegoats? You Make the Call! by Joe Bruno 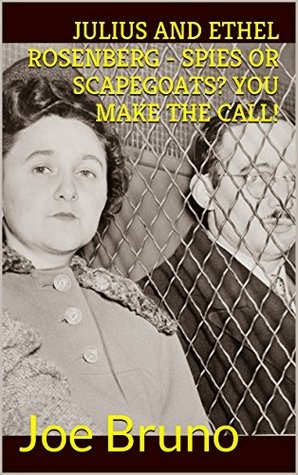 Julius and Ethel Rosenberg - Spies or Scapegoats? You Make the Call!
by Joe Bruno
My rating: 4 of 5 stars

Short but good book giving the entire story of the Rosenbergs. The author starts with the foreknowledge of what we know today and with an attitude that Julius is a "creep" so we know how things will turn out and are aware of the author's opinion from the get go. I haven't studied this case but am aware of it and the change in public opinion over the years and the knowledge that has come to light in more recent years. While the author tells the story giving us knowledge that wasn't known publicly at the time he does leave some surprises for when then were revealed many years later. Although public opinion often swayed towards claiming this husband & wife had been martyred by the anti-red cause, the author's take and the general opinion today is that Julius was justly accused and sentenced. On the other hand, while the author may be a bit heavy-handed against Ethel, popular opinion is generally still open to debate on the extent, if any, of her involvement but it's generally agreed, with the author also being sympathetic to, her punishment being unjustly harsh. I learned quite a bit of information about more recent events that I hadn't known and found the book easy to read. I would have preferred if the author had released details chronologically as they unfolded though to make the story more interesting rather than journalistic.