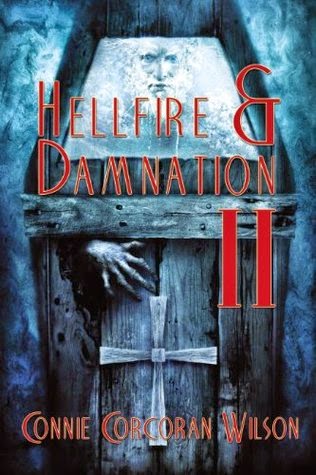 A collection of stories based on the 9 level's of Dante's Hell. I wasn't terribly impressed with this collection. I love Dante's version of Hell and had been expecting more; perhaps more horror or terror. The stories were mediocre. Some were real duds and the majority were just ok. The last few stories were better than the earlier stories making the average rating come out to a close 3/5.

1. Cold Corpse Carnival - A man died by falling into an ice pit and is kept there frozen, eventually becoming the small town's main (only) attraction. But the 130-odd-year-old corpse is in a state of Limbo. His body may be dead, or more like in suspended animation, but his brain has been completely functional all these years and he's vowed to exact vengeance on people in general who represent the decades of people who have dishonoured his corpse all these years, Just ok. Predictable with an unsatisfying ending. Interesting premise though and I remember reading an article once about a true-life miner's body on display somewhere. (3/5)

2. The Shell - A harsh story of an old Mayan religious fanatic who kidnaps a 12yo girl for Quetzalcoatl. She's there for a few days being raped and the story is a bit hard to read but the focus turns onto the girls courage, intelligence and bravery in concentrating on how to escape. This story gives me better expectations of Wilson's writing than the previous story. (4/5)

4. The Champagne Chandelier - A well-written narrative of an only child who upon getting ready for her mother's funeral looks back upon her flamboyant life with five husbands. She was widowed by them all except for a divorce from one who had two children, one a daughter, the narrator's own age, who was mean, evil and tormented her for the three years their parents were together. A tale of a dysfunctional family with a spooky ending. (4/5)

5. A Spark on the Prairie - This is pure historical fiction. An ex Kiowa Indian Chief who has been shamed for his cowardice narrates the downfall of the Natives and the greediness and lies of the white man until the end when they have all been rounded up onto reservations. Lots of quotes, names and dates, and BORING. (1/5)

6. M.R.M. - Very short but when of the best-written stories so far. A hen-pecked man has been working on an invention to modify his wife back to the way she was when he met her for most of their thirty year marriage. (4/5)

7. A Bridge Too Far - Three people are in some type of music competition, maybe reality show, this night they had to form a group, write an original song, then they will perform it the next day. The bridge to the chorus is stumping the songwriter of the group, she and the lyricist can't stand the arrogant cowboy singer and at the last minute have a plan to get rid of him. Short and sweet ... make that devious. Nothing rally happens though. (2/5)

8. Letters to LeClaire - A tragic little story set in 1920 where a brother returns home to bury his only sister and last remaining relative, age 23. He finds her correspondence in the house and reads it during the night he spends with the coffin, including his own letters while determining on the morrow to find out just exactly how his sister died. I liked the atmosphere of this one. (4/5)

9. Room Service - This was funny! On the way to the BEA a humourist writer finds herself on the same plane as her agent, a woman who has never smiled in the seven years she's known her. Trying to be friendly, she's rebuffed as the agent in the seat in front of her says she needs a nap then proceeds to recline her seat back as far as possible. The anger builds inside our author until, at the hotel, she ends up killing more than one person. (5/5)

10. Oxymorons - This one is a mystery that went over well with me. A secret service guy for the possible next Republican party leader talks with a close friend about this man's recent attempt on his life, the recent "accidental" death of his wife and many of the deep dark secrets of his past. I thought I knew what was going to happen, something much more sinister than the actual ending but it was a good read. (3/5)

11. The Bureau - A longer story than the others, this is a tale of family betrayal, greed, and murder. Illegal organ transplant harvesting is the theme and once one commits their first crime the next becomes much easier, especially when you keep it all in the family. (3/5)