Deliver Us: Three Decades of Murder and Redemption in the Infamous I-45/Texas Killing Fields by Kathryn Casey 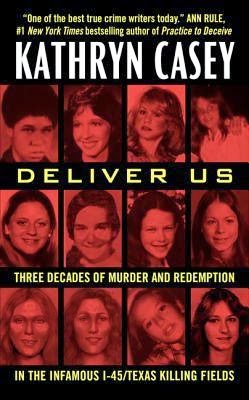 Deliver Us: Three Decades of Murder and Redemption in the Infamous I-45/Texas Killing Fields by Kathryn Casey
My rating: 5 of 5 stars

I wasn't particularly acquainted with these murders which all occurred along a specific portion of the Texas I-45 near Galveston so it was all pretty much new information to me. This is my first true crime by this author also and I found her writing incredibly sympathetic to the victims and their families which I always appreciate when reading modern accounts of murder. This book covers a lot of information and many, many cases while covering a time period from the late '60s to 2000. Some victims had a short amount of time spent on them while others had chapters while Casey covered trials that brought their killers to justice. Casey manages to skillfully keep the abundant information from becoming an overload by presenting the Killing Fields' history in chronological order and revisiting cases when new evidence is found while following the future crimes. In the end, Casey names the most likely suspect in each case where viable persons of interest were suspected but evidence wasn't solid enough for an arrest. She also concludes that the sheer number of small town police, their methods and politics played a major role in the number of unsolved crimes in this area. I found this a quick, engrossing read and love Casey's writing style. I'll certainly seek out some of her other books.