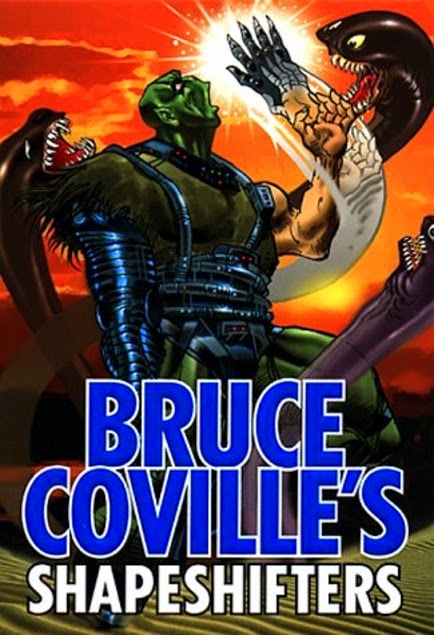 Bruce Coville has been the editor of a ton of anthologies for young people and this is the first one I've actually had a chance to read. It's a mediocre collection with a handful of previously published stories and the majority written for the collection. I'd only heard of a few of the authors, plus two great authors are also included Ray Bradbury and Jane Yolen. Obviously the theme that ties these stories together is shapeshifters of various kinds and forms. There were a couple of gems, a few duds, and most were just ok but they all averaged out to a solid rating of three. I'd read another of Coville's anthologies, especially because he did everything right as an editor. I read a lot of short story collections and Mr. Coville included everything I like to see. First and foremost, a copyright page that dates all the stories included letting us know which have been previously published and which are new to the collection (you wouldn't believe how many anthologies omit this information), and secondly, a brief biography of each author included. I find this very important information as it lets me know if the author is a veteran or newcomer, whether they specialize in the short story form or write novels and from this I may 1) realize I've read the author although the name didn't ring a bell at first glance or 2) go on to look for further works by the author. Kudos to Bruce Coville as an excellent editor of short story collections!

Now on to the stories included:

1. Homeward Bound by Bruce Coville (1987) - I've only read Bruce Coville's "Unicorn Chronicles" so it was somehow appropriate that this is a unicorn story. Nothing too special; I'd classify it as being a fairytale. It ends in a death, but the death is joyous and I'm partial to endings where death is a happy or redeeming outcome. (3/5)

2. I Was a Bestselling Teenage Werewolf by Lawrence Watt-Evans (1998) - Very short. The title says it all but an amusing twist ending. (2/5)

3. Myself by Mark A. Garland (1998) - Set in Outerspace aboard a spaceship, a boy has ended up alone, the last survivor. Or is he? This is a well-told story with mounting suspense and a reveal at the end. It's a thinker though and I can't say what the shapeshifter is as that's key to the story. Good one! (3/5)

4. Frog Princes by Janni Lee Simner (1998) - This is a silly story with a twist on the old fairy tale. How would the girl and the kissed frog prince get along today in modern America? (2/5)

5. Tricky Coyote by Susan J. Kroupa (1998) - Awe, I liked this story. It's about a Hopi boy who moves off the reservation to go live with his mother. A story of bullying, retaliation, the Native legends of Coyote and finally finding a home, love and acceptance. Good one. (4/5)

6. Swan Sister by Anne Mazer (1996) - A girl reflects her thoughts on how she feels left out having seven brothers who turn into swans every evening. Has a fairytale atmosphere and well-written but the ending didn't satisfy me. The first thing I did when I saw the author though was google to see if she was related to Norma and Harry and, indeed, she is their daughter! I grew up reading the Mazers' books. (3/5)

7. The Changelings (1995) by Jessica Amanda Salmonson - This is a Native American myth of the Tualatin or Wapato Lake Indians. I'm fairly sure the author took liberties with the creature in the story as I can find no reference to it online. This is a sad, depressing tale and only remotely fits the shapeshifter theme. I didn't particularly like it but did find the writing to be strong. (3/5)

8. The Talking Sword by Jack Dann (1998) - We are in the middle of the book now and this story is quite longer than the others, except Coville's opener. The first few sentences let us know the narrator is a sword who is really a demon. Quite different from any other story up to this point. What ensues is an example of how the demon creates dragonslayers. The story is full of pop culture references making it quite dated to a modern reader. I don't think it's held up well over time. It's a humorous story but actually became quite boring. (1/5)

9. Freedom by Connie Wilkins (1998) - More of a classic shapeshifter story this time around. A boy in a wheelchair is drawn to some wolf gargoyles he can see from his window and a girl his own age is drawn to him. They visit the wolf building one night and discover their true natures (and it is not wolves!), A much better piece than what's come before it. (3/5)

10. Fever Dream by Ray Bradbury (1948) - This story is the gem inside this collection; a very old tale from the master of science fiction. A very creepy, sinister tale that reveals what is happening quite early but the full meaning not until the horror-style ending. An ominous tale of evil and on another level of writing than the other stories in this collection (5/5)

11. The Electronic Werewolf by Lael Littke and Lori Littke Silfen (1998) - I enjoyed this one quite a bit! A bit dated with '90s computers and the title tells us the shapeshifter so no surprise there. But a well-written, intriguing story with some anger that doesn't quite let you know where it is going to go in the end. Written by a mother/daughter team. (4/5)

12. Wilding by Jane Yolen (1995) - I'm a big fan of Jane Yolen and this is by far the most original story in this entirecollection. She takes a unique twist on the theme set in a futuristic New York city where DNA manipulating is not only legal but used for sport. Even better than Bradbury's entry. (5/5)

13. Jonas. Just Jonas by Nancy Varian Berberick and Greg LaBarbera (1998) - I've never heard of these authors so was delighted to find this a fine entry into the collection. Well-written, set in the future, and like Yolen's piece a unique take on the shapeshifter theme. It's a story of courage ad being true to yourself when the truth could be a matter of your own life add death. A bit dated with its computer technology though. (4/5)

14. A Million Copies in Print by John C. Bunnell (1998) - Not exactly the best-written story. But a fun, and certainly different take on the theme than the others. Without mentioning the actual name of the series, our narrator tells us the sinister truth about those "Goosebumps" books and a plot to take over the world. (3/5)