The Wilderness of Ruin: A Tale of Madness, Fire, and the Hunt for America's Youngest Serial Killer by Roseanne Montillo 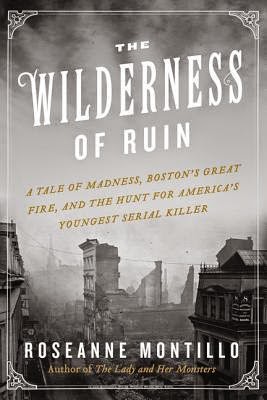 The Wilderness of Ruin: A Tale of Madness, Fire, and the Hunt for America's Youngest Serial Killer by Roseanne Montillo
My rating: 5 of 5 stars

Like Montillo's first book, "The Lady and Her Monsters", this book is not just simply about one thing. It is a history of a young criminal though two murders does not a serial killer make, named Jesse Pomeroy. Placing the reader in the late 1800s from approximately 1870 onwards, this is a social history of that time in Boston. Many topics are covered and even entire chapters are devoted to Oliver Wendall Holmes, Herman Melville, the history of mental illness to this point in time, the great Boston fire and Boston's World Fair of the 1880s. Jessie Pomeroy's life is detailed from birth to death, most of which he spent in prison in solitary confinement, upwards of fifty years. Mental illness, insanity pleas, the recognition of not being sane, and a backwards look at Jesse as a prime example of a psychopath are all key issues dealt with in this book. Roseanne Montillo has written a very literary volume that explores all the issues of the day at the time Jesse Pomeroy was alive, a social history if you will. It is a particularly in-depth look at "madness" as referred to in the title and how this era seriously began the study and genuine concern and a degree of compassion for people and criminals suffering unbalanced minds. Herman Melville was interested in Pomeroy's case and thus a chapter is devoted to him biographically detailing his obsessions, morbidity and madness. This book deals with main topics I'm interested in from Victorian true crimes to the history of mental illness and I found it a fascinating read. However, it is not a page-turner. As I mentioned, The Wilderness of Ruin, is most definitely a literary work that captivates and compels yet calls for a slower thoughtful pace.