Hot Dogs and Hamburgers: Unlocking Life's Potential by Inspiring Literacy at Any Age by Rob Shindler 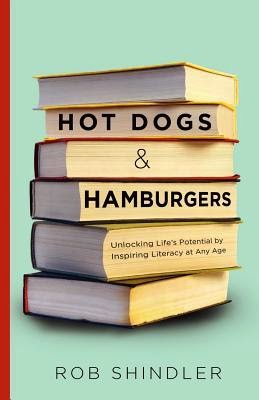 Hot Dogs and Hamburgers: Unlocking Life's Potential by Inspiring Literacy at Any Age by Rob Shindler
My rating: 5 of 5 stars

I love finding little gems like this inspirational memoir. Shindler has a son with severe learning disabilities which mainly make him unable to read. As a father he fails his "experiment" in trying to teach his son to read and decides that if he can learn to teach adults (people he doesn't love) to read with patience he may be able to bring those skills home and put them to use in helping his son read. I was drawn to this little book as I taught both my sons to read, the eldest was advanced and had started on his own by age 3. That was a lot of fun. I just added in the phonics and the rest was natural for him. My second son is autistic and has many learning disabilities, some which sound identical to Schindler's son. He went to elementary school half days and was homeschooled the other half. He has short term memory and teaching him often felt like banging your head on a wall as what he had successfully conquered one day, would be as if he had never heard of in his life the next. Anyway, he's succeeded in being able to read now at age 15, below age level, but he's a work in progress, as are we all. I became an expert in phonics and the school worked on the Dolch words. I found Mr. Schindler's book highly inspiring and related to him greatly. However this little book concentrates more on his teaching the adult literacy classes than teaching his son and these were wonderfully inspiring moments. It's an inside look at who these people are that end up as non-reading adults,why they decide so late in life to learn to read and the determination and success they find in this new atmosphere as opposed to the school system that let them down as kids. Schindler's book often reminded me of episodes from that show starring Judd Hirsch "Dear John" which was an adult class or group of some sort (for divorcees or something). Anyway Schindler's classes had wonderful comedic moments, a cast of eccentric characters and moments that pulled at the heartstrings. A very well-written, uplifting book on parenting, helping others, learning disabilities and keeping dreams alive by remembering you are never to old to learn something new! Along with just how important reading is for a fulfilling life (not novels, but street signs, menus, etc).