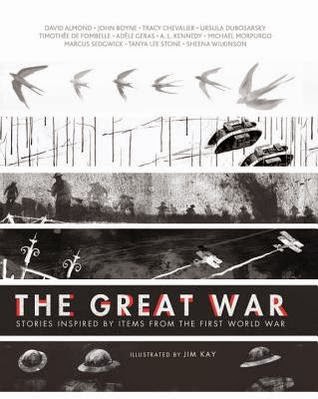 The Great War: Stories Inspired by Items from the First World War illustrated by Jim Kay

NOTE: I don't as a rule post my DNF books here on my blog but felt compelled to post my experience with this book as I found it so offensive.

I read three stories then decided to DNF. You'll see why as follows:

1. Our Jacko by Michael Morpurgo - I've really enjoyed the books I've read by this author so was looking forward to this one. It turned me the wrong way though. I found it overly sentimental in a fake emotional way that goes for the heartstrings and is supposed to make the reader all weepy. Frankly, it made me roll my eyes. There was an emphasis on white flowers and the symbolism of them which made me think of the "white poppy" campaign that goes on these days on Remembrance Day, which I am emphatically opposed to. (1/5)

2. Another Kind of Missing by A.L. Kennedy - The war is over and a boy tells of visiting his father in the nearby hospital, a converted Duke's manor and estate. Very morose and depressing, though it honours the servicemen adequately. (2/5)

3. Don't Call It Glory by Marcus Sedgwick - Ugh! This is so dismal and anti-war. While concentrating on a WWI German soldier who died, we are somehow supposed to think that fighting WWII was "futile" and "unjustified"! Tell that to the Jewish and Polish. This story does feature a boy wearing a white poppy on Remembrance Day and actually targets a man selling red poppies as "righteous" and "unshakable". Offensive to the millions who have died in war both the victims and those who served. (0/5)

At this point, I can't stomach to read another story. Obviously the stories are all anti-war, judgemental of the realities of history as it actually happened and propaganda pushing the white poppy.

OF NOTE: While reading this I am currently reading the memoirs a Polish man, Julian Kulski, written when he was 16 years old convalescing in the hospital after WWII.  My review will come shortly so I won't go into much detail.  However, his experience as a boy of 11 to 16 living in Poland under the Nazi Occupation and becoming a member of the Polish Underground Army at 12 and a German POW at 16 is heart-rending, powerful and difficult to read.  To have to read the fiction stories above written by people who were not in WWI (probably not in WWII or any war for that matter) and putting judgemental words into privileged modern-day children's mouths was offensive to me and disrespectful (to say the least) of the suffering of people such as Julian Kulski.