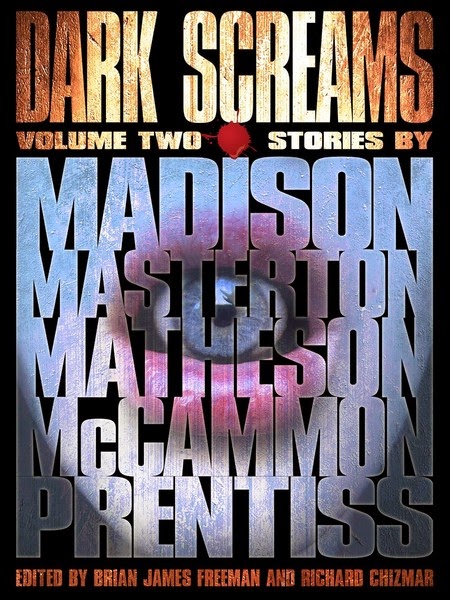 This is the second book in this ebook only series that collects five short horror stories by popular authors. Two of the stories in this collection are previously published with the other three being printed for the first time. In the first book, I knew all the authors, this time I only know two of them. However, my favourite story in the collection was by a new-to-me author, Shawntelle Madison.

1. The Deep End by Robert McCammon (1987) - This collection starts with a previously published story by master genre writer McCammon. A typical alien/monster story. Entertaining, I liked it, but the ending was a bit lacklustre. (3/5)

2. Interval by Norman Prentiss (2015) - Starting with a missing plane, which is such a current fear these days, the story progresses into a dark and morbid story of a visit by a demon to those who are going through grief. A genuinely morbid story, well told. (4/5)

3. If These Walls Could Talk by Shawntelle Madison (2015) - I can't say much about this as the story slowly builds up in tension and reveals it's plot at the chilling end. However it deals with a creepy Gothic mansion and one of most people's darkest fears, certainly one of mine. Never heard of this author before. Great story! (5/5)

4. The Night Hider by Graham Masterton (2015) - This was a fun haunting story. A bit creepy but more scary in a fun way, if you kwim. Here we have a haunted wardrobe and not just any wardrobe, but CS Lewis' original wardrobe that inspired the Narnia books! (4/5)

5. Whatever by Richard Christian Matheson (1997) - The second previously published story in this collection and by far, the longest. This is not a horror story by any means, but it is on the dark side. I'm not sure I feel like it really even belongs in the collection. Written as a series of recorded conversations/interviews, magazine articles and the narrator's personal notes this is the story of the rise and fall of a rock band during the span of the seventies. The letters/articles are partly chronological with the occasional one coming in from further ahead in time letting us know how some things turned out at the same time as the story is being told. This story honestly brings the collection to a unsatisfying ending, but I did enjoy it a bit. (3/5)

Looking forward to seeing wo the line-up of authors are for Volume 3!