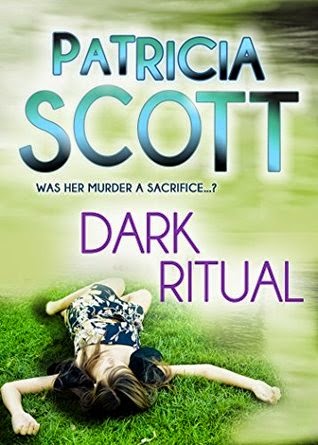 Dark Ritual by Patricia Scott
My rating: 4 of 5 stars

A fast entertaining British police procedural. I picked this up when it was offered as a freebie on Kindle and am pleased to have found this gripping tale. Starting off with a murder that has all the signs of a pagan harvest sacrificial ritual, police have plenty of suspects who were not keen on the young journalist snooping around the small village's secrets and affairs. The book combines a police force team headed by an amiable DCI who takes up with a widowed police officer's wife who becomes his sounding board. This is a great pairing that lends an air of both the police procedural with the amateur cozy sleuth putting their heads together. I was utterly in the dark on figuring out who the perpetrator was until the twist near the end, then I must admit it became clear to me how the twist would turn once more to reveal the identity of the real killer. Behind the quite gruesome murder case is a light-hearted romance between the two main characters and I found this to be a charming British village mystery while maintaining an edgy dark side to the grisly murder case. The author has written a few other books which also look good.