Until You Are Dead, Dead, Dead: The Hanging of Albert Edwin Batson by Jim Bradshaw 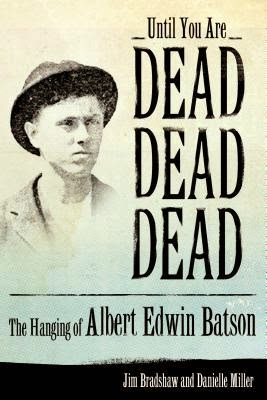 Until You Are Dead, Dead, Dead: The Hanging of Albert Edwin Batson by Jim Bradshaw


This is a true story of the case of Albert Edwin Batson who was hanged for killing a family of six in the early 1900s Louisiana. The book is from an academic press and as such does not read like a story as many of the true crime books I usually read. I found the book a bit hard to read at first, very much like a newspaper. It is full of direct quotes from the newspapers and the author's narrative between is journalistic in style too. However, once the mother comes on the scene things become much more interesting and I got quite involved having a hard time putting it down. It is a very interesting case and shows a very early example of "trial by media". The book relates the case and the two trials through the newspapers of the time as a transcript was not taken. Batson was found guilty twice and hanged for the crime but maintained his innocence throughout. There are many, many troubling things about the nonexistent police inquiry and the following trials. The first was acquitted on a technicality. Batson was the only suspect considered, witnesses were few and unreliable, all evidence was circumstantial and the jury was rigged in favour of capital punishment, a "hanging jury". We will never know if he was guilty or not, but reading the book clearly shows that life imprisonment was an option for sentencing and was in fact recommended by the governor's board at the last stages only to fall on deaf ears. If Batson had spent his life in prison would his determined mother and supporters have had the time to find real evidence of the true perpetrator?