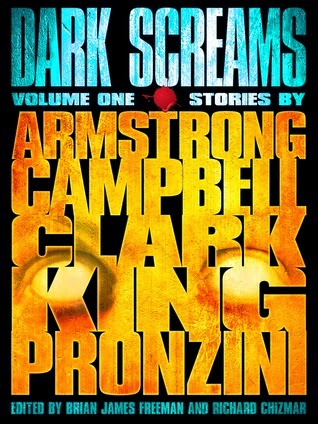 A small but satisfying collection of dark tales by popular authors published by Random House's direct to eBook house, Hydra. All the stories are new to the book except for Stephen King who handed in an early previously unpublished piece.

1. Weeds by Stephen King (1976) - This is a previously unpublished story by King but once reading the first sentence the constant reader recognises what we have. This is the original short story King adapted for the episode "The Lonesome Death of Jordy Verrill" in the movie Creepshow and adapted again into comic book format for the accompanying book. Virtually the same story as we know but this text version does make the familiar tale more scary than the campy version we are used to. I liked it! (4/5)

2. The Price You Pay by Kelley Armstrong (2014) - This is an author I've only read a bit and have wanted to read more. Surprisingly, this isn't paranormal or even what I would call horror. It's an incredibly well-told psychological thriller of a stalker and kidnapping with a twist ending that threw me off. I knew something was up, but I picked the wrong person as the schemer. Loved it! (5/5)

3. Magic Eyes by Bill Pronzini (2014) - An inmate in an asylum for the criminally insane is writing in a journal at the bequest of his "shrink". He starts off saying he's sane and did not kill his wife, but by the end, well, you can imagine. Fairly predictable though. Never heard of this author before. (3/5)

4. Murder in Chains by Simon Clark (2014) - Incredibly intense. A man wakes up to find himself laying in the sewers with a padlock around his neck and a ten-foot chain attached to a sleeping hulk of a man he decides to call, Goliath. Very creepy! (5/5)

5. The Watched by Ramsey Campbell - I didn't particularly like this one. A bit hard to describe without giving away the plot, but a paranormal tale which failed to deliver. Predictable with a boring end. (2/5)