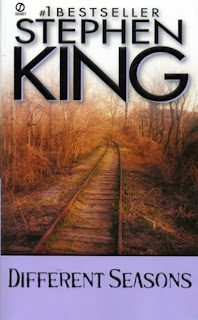 
I am (re)reading King's works in chronological order. I read this book when it first came out. Up to this point in his career he had proven he was a master of genre fiction, even including the Bachman books which though not horror are still various genres. Here King now turns his hand to straight fiction with four novellas within this collection, bringing some of his finest work to date and proving that he can write pure fiction, even "literature".

1. Rita Hayworth and the Shawshank Redemption - This story is the narrative of a lifer at the prison called Shawshank. Shortly after he is incarcerated along comes a new inmate named Andy Dufresne. Andy has a huge impact on our narrator and he tells us Andy's story along with what life is like inside a maximum security prison. A gritty dramatic prison tale that held me fast from beginning to end. (5/5)

2. Apt Pupil - This gets close to what we've come to expect from King. Not a horror story, by any means but a thriller; a psychological thriller. I couldn't quite remember this story at first but it all came rushing back as I started to read. A 14 yob is fascinated with the death camps of the Holocaust and after some detective work finds out a neighbourhood man is an SS Nazi in hiding, blackmails the man into telling him all about the details of what really happened at the camps and the two form a respect/hate relationship that lasts for the rest of their lives until what drew them together pulls them apart with vengeance. A bit hard to read at times (these are sick individuals) but an unputdownable read! (5/5)

3. The Body - I was looking forward to re-reading this one the most as "Stand By Me" is one of my all-time favourite movies that I've seen many times. I know the story impressed me the first time but upon re-reading, I find the movie is too firmly stuck in my mind. The story is, of course, good but it is very long and very retrospective more than having action. We are a party to the narrator's thoughts and this is truly a piece of literary coming of age work. I'm glad to have read it again and feel nostalgic and melancholy afterwards but, as Ive said, the movie remains foremost in my mind. I could not help but picture the actors, especially Kiefer Sutherland and Corey Feldman. Feldman's character Teddy is quite different in the story and it was hard for me to reconcile the two. Vern, Jerry O'Connell's character, is completely re-written so him I didn't picture plus he is the least dominant character in the story, whereas he has an equal role in the movie. This story has tie-ins to the Stephen King universe with Sheriff Bannerman being mentioned a couple of times, only since this takes place in the fifties he is only a Constable at this point and Shawshank prison (from the first story in this book) is now part of canon, being mentioned twice. (5/5)

4. The Breathing Method - This is the only story from this collection that I didn't remember at first and the re-read didn't bring it back to mind either. So it felt new to me. This is a tale of the macabre and the closest to what we would expect from King, in this collection. It is also the weakest, in my opinion. It's firstly, a story of a men's club where they gather and tells stories, sometimes scary but not always, though Christmas is always an unusual or weird tale. There is something unsettling about this club and our narrator at times tries to discover what it is but never has the nerve to fully go all the way, realizing, as we do, that he is better off not knowing the club, the host and the house's secrets. Secondly, the story narrates a tale one icy, stormy Christmas of a young pregnant woman who dies in an horrific accident on the day she goes into labour. I actually found this boring at times, way too much time was spent on describing "The Breathing Method" otherwise known as Lamaze that it felt scholarly. My least favourite story in the book. (3/5)

PS - For those of you following me on this project, this book marks my completion of the goals I set out for myself for this year (2014)  I read several books this year as they were either short or collections.  It really helped push me up the list a bit.  So this is it until next year.  Then, as always, the tradition here at "Back to Books" is to start the year off with a Stephen King book and the next one up in published order is "Christine" when I was 15.  Really looking forward to that.  I remember the book freaking me out quite a bit, even though the movie watched later, was dumb.