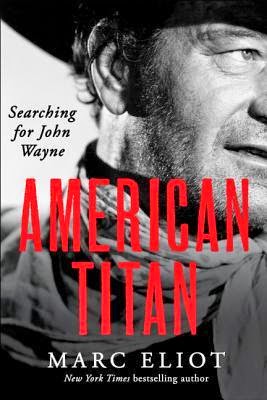 
An all around interesting biography on John Wayne. The author's note at the end of the book explains his method of biography writing which he bases on an actor's body of work reflecting the life of the person; he explains the concept of "auteurism". I'd never heard of this before. However, I enjoyed the book quite well. It is a highly positive look at John Wayne in chronological order through his movies. While remaining "pro"-Wayne the book does take on his controversial aspects such as Wayne's refusal to serve in the military. I've seen a lot of Wayne movies and knew him to be the ideal "American" of his time but didn't really know much of anything about him except that he died of cancer. The biography was highly entertaining and informative with lots of anecdotes about happenings on set and his relations with other actors of the day. Many famous names are included here. Wayne was a very opinionated man, extremely political and Republican who had no time to waste on fools so there are certainly some captivating stories! But The Duke was always a gentleman and respectful to others even when he totally disagreed with them. The author's writing is very readable but he does tend to follow a pattern chapter after chapter which becomes a bit tedious, such as continuously stating the salaries Wayne and his co-stars received for each movie as footnotes. Occasionally this information was eye-opening but the frequency of it is tiresome. Overall, a good read about the American patriotic movie scene from the silent movie era to the early seventies focusing mainly on westerns and war movies.