BOOK TOUR: Beyond the Pale edited by Henry Herz 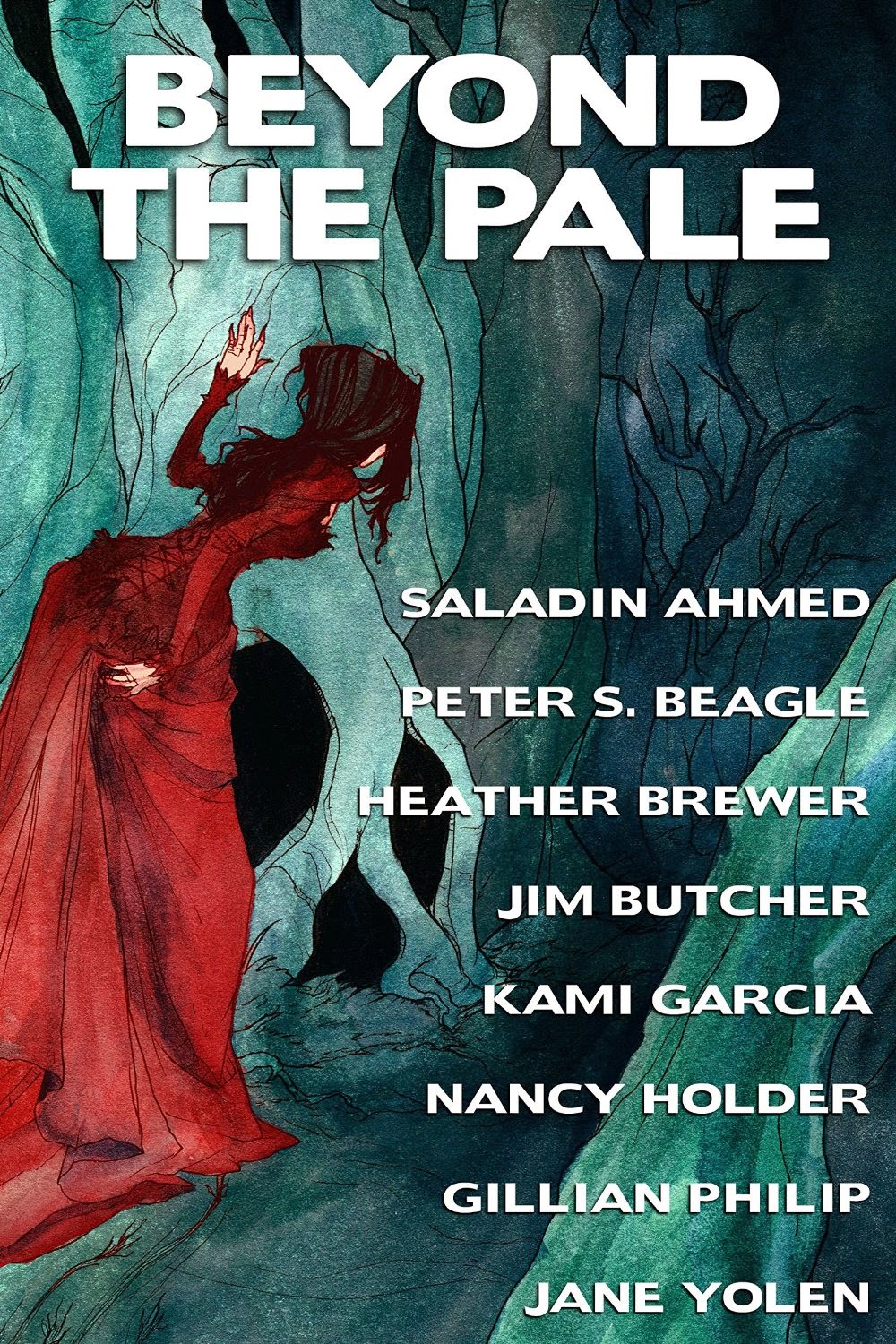 This is an absolutely fantastic collection of fantasy stories aimed at older Young Adults written by top-notch authors that all centre around the abstract theme of that thin veil that separates our world from the beyond. With most anthologies as a reader I always expect a mixed bag with perhaps a dud or two but Beyond the Pale is without exception the best collection of short stories I've read this year and this is my 10th.  The stories range from great to excellent. Most of the authors I had heard of, several I'd already read and the others I would read again.  A couple of my all-time favourite authors are included here also: Peter S. Beagle and Jane Yolen.  Superb!

1. Hooves and the Hovel of Abdel Jameela by Saladin Ahmed (2009) - A fine story to open this collection with!  Hard to describe its genre as just what exactly but mostly it resembles a tale of the Arabian Nights with touches of Frankenstein, mythological creatures or perhaps demons and a narrative similar to Dracula's Jonathan Harker as he tells the tale of his strange journey and the summons he receives.  Well done! (4/5)

2. The Children of the Shark God by Peter S. Beagle (2010) - I love this author and have read a lot of his work.  This story grabbed me from the first paragraph as I entered the folkloric story of the shark god.  The plot is quite simple and basic, one done many times, of the god transforming into human form, taking a maiden as his wife and siring offspring, here it is twins.  He only returns to visit the wife once a year but the children are never told who their father is.  It is Beagle's magical writing that transcends this tale beyond the typical plot.  It is beautiful and ends up dealing with death (as much of his work does) and the selfishness of wallowing in one's own grief over the death of a loved one. Lovely! (5/5)

3. Misery by Heather Brewer (2012) - Misery is a small town but no one knows how it got its name.  Certainly no one is ever miserable.  They are all quite jolly, to a degree.  They do wish, perhaps that Misery had colours, like somewhere they've been before, but no, Misery is black, white and shades of grey. And every year every one has a day when they get a Gift from the one with the psychic connection able to give the Gifts.  Alek is afraid his Gift will be bad this year, not because it has ever happened to anyone before, but because he has an inner sense about it. And when Alek receives his Gift it is something the gift giver has only given once before.  Nothing. (not just *not* a present). Nothingness. The absence of being... Creepy. Loved it (5/5)

4. Shadow Children by Heather Brewer (2010) - This is a new author for me so I was hoping this would be as good as the previous story by her, and no disappointment here.  Total creep-out!  Little brother Jon is afraid of the monsters in his room at night and big brother Dax is stuck babysitting him.  Dax thinks to let Jon "cry it out" leaving him in the dark a little longer but the piercing scream sends him running.  Then the two of them are battling not their just their own lives but the lives of the entire human race.  Creepy!! (5/5)

5. Evan Hand by Jim Butcher (2010)- I'm not a Dresden Files reader; tried the first book and it didn't work for me.  This story takes place in that world and is told by Marcone.  It's an ok story about the underworld involving demons, etc and has a bit of a Cal MacDonald vibe. But Cal is waaay better.  Harry is not actually in this story.  First story I didn't love. (3/5)

6. Red Run by Kami Garcia (2012)- Oh, a ghost story!  A girl goes out along a haunted road at night to get the ghost who has killed six people over the years including her older brother.  Really, really, really good.  Everything a ghost story needs and very tense at the end, not knowing what is going to happen.  I hadn't heard of this author before.  (5/5)

7. Pale Rider by Nancy Holder (2012) - Awesome!  This is longer than any others yet and could be the story the title of the anthology is based on.  This story actually feels very much like the prologue of a novel; it is so in depth, and even though it ends perfectly a whole novel could follow up from the story.  Eight years after the end of the world a an African-American girl is found by a German young man and taken to Germany, there she discovers her magical talent and together they search for the answers that caused the great apocalypse.  Wonderful fantasy about fairies and goblins.  (5/5)

8. Frost Child by Gillian Philip (2011) - This starts with an editor's note explaining the story is a prequel to the author's novel "Firebrand". It is a haunting story of how a little girl came to be found and brought back to her own people and yet she is quite different.  A tale of the Sithe, witches and kelpies.  The girl is a fascinating creature but there is a darkness about her that is not evil, but uncomfortable.  Well-written.  I haven't read this author before (4/5)

9. South by Gillian Philip (2012) - Another haunting story of the sea but selkies this time.  I love selkies! A generational story of a man who falls in love with a selkie, their daughter and eventually her son, his grandchild.  A beautiful story, told skillfully with just a hint of darkness in the atmosphere.  Selkies are my absolute favourite mythological creature.  Both of these stories were good.  I will have to look into this author. (4/5)

10. A Knot of Toads by Jane Yolen (2005) - Fantastic!  I'm a long-time fan of Jane Yolen and this tale of witches, curses and days of yore is spellbinding.  There are three knots mentioned in the tale and as each is recognised and undone in it's own way, a family loosens the ties the Old Witches have on them but not before the current patriarch is frightened to death by what he has found out.  Wonderful!  (5/5)

11. The Adventures of Lightning Merriemouse-Jones by Nancy & Belle Holder (2006) - As the editor's note proclaims the book will finish off like any great meal with a "light dessert".  This is a fun, cute reimagining of the Dracula story but peopled with mice and rats.  The story concentrates on the storm at sea and the count's attacks upon Lightning (Lucy).  Cute. (4/5)