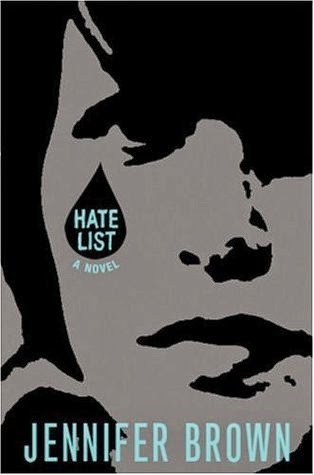 
Astounding! If I hadn't already read her latest book "Torn Away" I'd give this 5 stars, but that one was so good the bar is pretty high in my expectations for this author. This is Brown's first book and one I had wanted to read but the school shooting theme sort of made me roll my eyes as that's mostly been done and finished in my book. However, "The Hate List" is different, really quite different. The focus is not on the shooter, nor on the student body's recovery afterwards. Yes, those things are certainly there and important to the story. But those aspects are shown through the eyes of the girlfriend, the shooter's girlfriend. This is her story. How she met Nick, fell in love, became his girlfriend. Sure Nick talked about death a lot, so she did too, but that was just their "thing", wasn't it? Sure she was the one who started the Hate List but it was just a game. Who knew Nick took it so seriously? She was just as surprised as anyone else that day when the gun came out and the shooting started. She needed recovery too. She can't help that the people targeted were those on the Hate List. She didn't know Nick thought she wanted this too. The police think she did too. She's a suspect, she didn't shoot anyone, in fact she got shot. She took a bullet aimed at her worst enemy to make Nick stop. But she's a suspect. She's also a hero. This is her story and wow! was I riveted. I was there along beside Valerie the whole way. She is 17 and such a truly real character; I don't think there is any teenager who hasn't shared many of the feelings that fleet Valerie's mind. Her life sucks at times, sometimes because her parents are too wrapped up in themselves and sometimes because she does stupid teenager things. But she's a good kid who got herself into a terrible situation that many people have to recover from, including herself. Valerie's not the only one hurting from guilt though and the revelations at the end are truly heartbreaking. When we cross paths with someone truly disturbed, who is calling out for help in their own way, we can all too easily find the coulda/woulda/shoulda guilt. I've found a new author I'm terribly impressed with. Her characters and dialogue are so achingly real it hurts.

View all my reviews
Labels: 2009 4* contemporary fiction realistic fiction YA