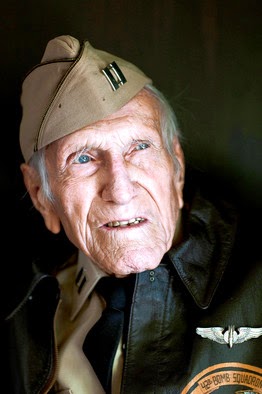 Not many people go through any of the events that happened to Louis Zamperini in his life and lived to tell about it.  And not only that he was an Olympic runner before he started his army career: a fighter pilot in WWII, crash survivor who spent 47 days adrift at sea, endured the harsh realitiy of being a Japanese POW.  Hi psychological torments upon returning to civilization had there affect and he almost lost his marriage, but they stayed strong through the worst of it and remained married for 54 years until her death in 2001. After getting his life back together he returned to Japan as a missionary, came to the 1998 Winter Games in Nagano as a Torch Bearer.  He wrote two memoirs of his life, one in 1956, the other in 2003.  He remained physically active until his death participating in skiing, mountain climbing and, of course, running.

Read his Obit in the NYT

And I thought now would be a good time to bring back my review of his biography by the talented Laura Hillenbrand.  A stunning book that I've just heard is being made into a movie.  I wrote my review back in early 2011 and expressed my opinion that it would make a good movie then! 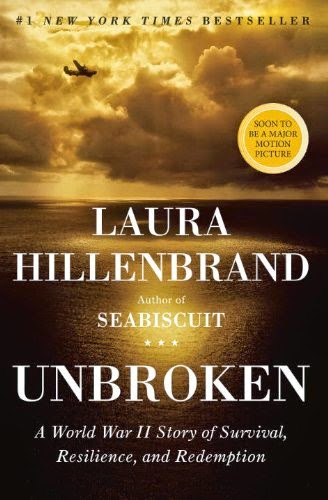 
All he could see in every direction, was water.

Reason for Reading: This book dealt with many topics that interest me: World War II, especially the war with Japan, the Japanese war atrocities and survival stories, especially those at sea.What an amazing book! I would give it 10/10 if I could and two thumbs up if it were a movie. I'd be very surprised if it wasn't made into a movie either, unless telling about the relatively unknown Japanese atrocities is too much for Hollywood to handle.Louis Zamperini was a boy with humble beginnings, who grew up to have a shot at Olympic stardom, which was torn away from him by WWII and instead replaced by one of the most horrific survival stories you will ever hear. Seven years in the writing Hillenbrand has brought a book and a story that will not be forgotten by time. This is a story that everyone need read to see what despicable, horrific things human beings are capable of doing to others and how the spirit of other human beings are capable of surviving even the most degrading and self-demeaning tasks placed on top of daily torture of the most extreme kind. This book is hard to read in many places, but is also full of many moments of pathos. The POWs managed to find little ways to brighten their days at the expense of their prison keepers to help keep their morale up.Louis started life as a thief and a thug, until his older brother took his energy and placed it into something more constructive. Track. Louis was a natural, but didn't take to it kindly at first, since he easily won without trying, until he saw that with real effort he could actually break records and his dream for the Olympics took over and he became a changed youth, participating in the Berlin Olympics. The War came along, and the draft changed Louis's life forever. As a bombardier of a B-29 he survived a crash into the Pacific Ocean and floating aboard a life raft for a record breaking 47 days with two other crew members only to be "rescued" in the end by the Japanese. Where he then spent the rest of the war with Japan as a POW in their Geneva Convention breaking camps. As one officer is quoted as saying "This is not Geneva. This is Japan."The rags to riches story of Louis' childhood truly endears him to the reader as a character one really cares for. He is a sharp, intelligent man-youth, witty and with a sense of fun, that one cannot help but fall for him. Making his life story all that more horrific. Hillenbrand has done a good job of bringing Zamperini to life as a human being with his character strengths, quirks and flaws. The survival in the Pacific makes for absolutely riveting, unbearable and compelling reading. Hillenbrand, while writing of the POW experience, also manages to reveal some information on why the Japanese atrocities are so little known today and why their war criminals were given amnesty, while German war criminals are still hunted down to this day. (Though I believe what they presume to be the last living war criminal was extradited in just the recent past.) It certainly had nothing to do with the Japanese being any less inhumane during the war. In Hillenbrand's "Acknowledgements" she notes that the war is still a controversial topic in Japan and some of her Japanese sources asked not to be named. A MUST READ BOOK!!!