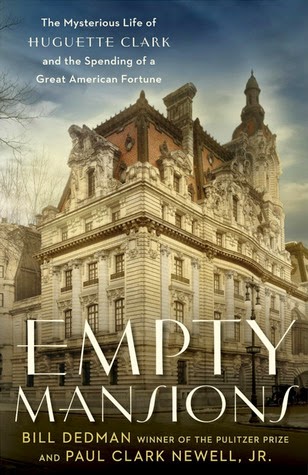 
I have Asperger's and this is my take on Huguette Clark. I absolutely thoroughly enjoyed this book which is a biography of two people, father and daughter, while also being a history of the Gilded Age and a brief overview of the 20th century. I had heard of Ms Clark when she was in the news and concern was raised about whether she may be a case of elder-abuse by those in charge of her financial and medical care, since she was a reclusive centenarian. I then forgot about her until I read a few reviews of this book. Reading those couple of thought-provoking reviews it crossed my mind as to whether Huguette might have been Aspergian; did she have Asperger's.

I thought of this because I myself have Asperger's, am a loner and for a certain period of my life was house-bound by choice. My reading interests (naturally?) involve recluses and mental health and historically I'm well-read in the Victorian age and early 20th century. Thus, could not pass up this book.

Starting off historically we are given the story of W.A. Clark's life, born 1839, a copper baron and once possibly the richest man in America. The history follows his life, then his second wife, 40 years his junior and their two children, progressing on with his youngest daughter Huguette who lived until the ripe old age of 104 and died in 2011. It absolutely amazes me that the two people, father and daughter, only two generations of a family cover the time period from the 8th President of the US of A, Van Duren to the 44th President, Obama. Hugette herself barely escaped two world disasters, the sinking of the Titanic and the attacks on the World Trade Center. Fascinating!

I don't feel Huguette had a sad life at all. Of course, she suffered sad events such as the death of her elder sister at only 17 years of age and perhaps Huguette's life may have been different if this very close sisterly bond had been able to continue into her adulthood. Yes, she had empty mansions and several apartments but many of them were inherited and one especially was dear to her because of it's meaning to her mother. She had many obsessive hobbies and was a very talented painter. Her hobbies included doll houses, normal sized-dolls, miniature house replicas, expert knowledge of Japanese cultural history and cartoons. Painting was more of a profession, though she didn't sell her work; she did consider herself an artist. Huguette may have inherited astronomical amounts of wealth, by today's standards, but this was obtained for her and the family by her father during the Gilded Age, a time when money practically grew on trees for the rich and their extravagance matched that ideology.

Huguette herself, like and even more so than her father was passionate about charities and donated millions during her lifetime to the arts, artists, animals, Israel and Girl Scouting. She also was a tremendously giving person and gave away millions to those she called friend. She was a loner, a person who preferred solitude to company but it wasn't until her 50s when her mother died that she truly become reclusive and even then she continued to have occasional visits from a handful of the closest friends. Because of the traits I've mentioned so far, I do come away from this believing that Huguette may very well have been Aspergian. The facts as presented in the book tell that all doctors who examined her diagnosed her free of any mental illness, she was always a lucid person, combine this with the intelligence, talent, "eccentricities" intense hobbies and self-induced reclusiveness, while at the same time being a content person I certainly can identify with her and feel quite confident she may well have been on the Autistic Spectrum, namely Asperger's. Choosing to live in a hospital setting once she no longer had anyone to look after her, she had outlived all her doctors, makes perfect sense to me.

The only parts of the book that didn't interest me were the detailed descriptions of the insides and contents of the mansions and apartments. I did find truly absorbing though the life, thoughts and doings of Huguette, a person who on one hand held onto many, many objects (including empty mansions) for sentimental reasons while at the same time handing out cheques for hundreds of thousands and millions of dollars to friends and acquaintances with families and children who needed the money when she herself had no personal use for it except for feeding her hobbies and obsessions; the latter being a typical way of life for aspies. Absolutely loved this book! And am glad Huguette had the money to be able to fulfill herself, during an age when she was not understood, and also able to spread that money to the charities and people she felt could use it and needed it more than she.