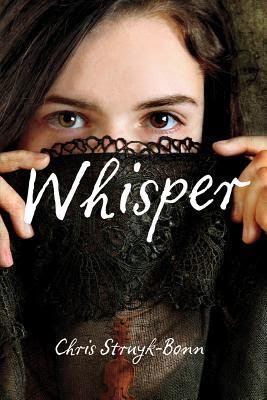 
This has been sitting on my shelf for a few months and I wish I had read it sooner because I just adored it! At first it feels like the usual YA dystopian fare, this time with the outcast society of deformed people, with children, especially girls being abandoned at birth. Our narrator is an older teen girl, on the brink of womanhood, with a cleft palate being raised in a camp for outcast children way out in the woods, with only a couple of others and an elderly caretaker. I fell in love with the main character right away and the beginning setting of the camp, which at first reminded me of the society in Wyndham's "The Chrysalids" but without any of the religious themes. This changes though as the world expands beyond the camp. What I particularly liked about this book and what makes it different and unique in this, somewhat overdone genre that is still a favourite of mine, is the absence of any government, rebel group or movement to overthrow the government. These sorts of books are often about how the people realize they are being oppressed, they join together, go after the government dictatorship and bring it down. "Whisper", refreshingly does not even introduce us to the government of this world. The story is simply about a few outcast youths, the downtrodden of this society, and their march forward in life. They are not political. Gradually through the eyes of Whisper, her boyfriend, missing an arm, and a little girl they've grown up with, who has webbed digits, we discover what is wrong with this world and are given enough clues to put together what has possibly happened; why the deformities are becoming more rampant, who seems to be in charge, etc. There is some technology and knowledge in the world but it belongs to the elite and the society (perhaps world) reminded me of what one assumes places like Calcutta must be like. With the poverty and ruralness outside, then the population gradually becoming denser the closer one comes to the city and once one arrives, the horrific difference between the poverty stricken areas and the parts where the affluent live. The book brings a lot of issues to think about and the perseverance of the main character to keep her dignity and strive to make a better life for herself and her loved ones, in the world she lives in, without changing the world itself, is more realistic than most teen dystopias written these days. The more I think about it the more I realize I was taken with Whisper. The book doesn't seem to leave any threads hanging, except that the character's lives will continue on from here, so I'm thinking (hoping!) this is a complete book by itself and not a trilogy or series. (I'm so tired of them...) Though I think the author could write another story taking place in the same "world", expanding the world building, perhaps showing us a farming family, or characters working in a factory. Some readers may want more than just the hints given about SWINC. Whatever direction she goes, I'll be looking out for the author's next book.