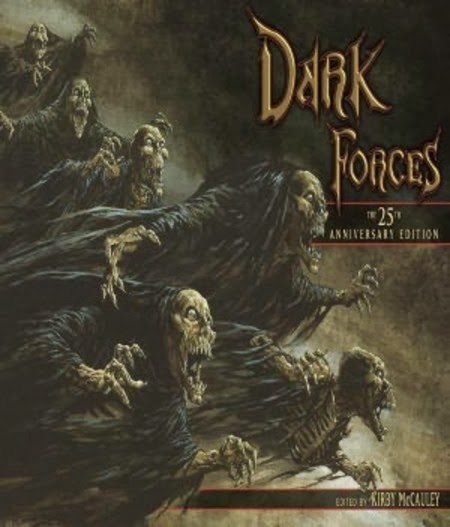 "In 1980, Kirby McCauley assembled a landmark horror anthology that set the benchmark for the genre. That book was Dark Forces, and while it has been imitated many times, it has never been matched.

All of these stories are on the must-read list for any new horror fan, including Stephen King's classic novella The Mist, which was made into a major feature film by director Frank Darabont.

This special edition eBook features an afterword from editor Kirby McCauley and a bonus interview with McCauley conducted by Kealan Patrick Burke for the 25th Anniversary Special Edition published by Lonely Road Books."

Purchased an ebook through the Kindle Store.

I am currently (re)reading Stephen King's works in chronological order and noticed "The Mist" was the next official title on the list.  It first appeared in this collection, then later went on to be slightly edited and included in King's own collection "Skeleton Crew".  So I was quite pleased to find this 1980 collection of horror stories by some well-known authors now available on ebook and eagerly purchased a copy for the opportunity to read King's original version of this masterpiece.

Overall, The Mist is the best story in the book.  A second novella is included by T.E.D. Klein and that was my second favourite.  The other stories were hit and miss with me.  I knew some of the authors, hadn't heard of others, my enjoyment ranged from a few 5* down to one I couldn't stand, but most were in that ok 3* category, thus bringing my overall rating of the collection to a 3/5.  If I'd rated "The Mist" by itself it would have been a huge 5/5.  All stories included are copyrighted 1980, written on the editor's request especially for inclusion in this collection.

Since I read this book for the purpose of reading King's Mist, I am starting with that review even though it actually is placed as the last book in the volume.

23.  The Mist by Stephen King - Pure perfection!  A totally engrossing, absorbing, creepy story that keeps you reading and reading.  This is a novella, and a long one at that.  Supposedly, King did some editing to the story before including it in his collection "Skeleton Crew" and ever after, the edited version is the one that has been re-printed.  Because of this, I wanted to read the original 1980 work.  This is King at some of his best, he carries a large cast of characters, his evil is mostly hidden by the mist not letting the reader know positively whether it is science related, paranormal, evil from Hell or what? The small group of "main" characters are fleshed out well and the narrator and his little boy stay the main focus, bringing a familial sense of urgency to the story.  Great piece of work.  This is the last story in the book, but I'm including my review first because it is, after all, the reason I read this collection to begin with. (5/5)

1. The Late Shift by Dennis Etchison - Pretty freaky story to begin with.  Two friends get into town after a while and run into an old acquaintance working the night shift at a convenience store.  He seems dazed and unwell so they leave and follow him only to discover a strange operation going on between the local hospital and a television production company. (3/5)

2. The Enemy by Isaac Bashevis Singer - Well, this has me stunned.  I pretty much had this summed up as a ghost story and followed the clues, figuring I knew what was up and how it would end.  But it didn't.  And now I'm at a loss.  Hmmmm... Entertaining.  Well-written.  (4/5)

3. Dark Angel by Edward Bryant - A professional witch gets revenge on her highschool sweetheart twenty years later.  Not my type of thing.  (2/5)

4. The Crest of Thirty-Six by Davis Grubb - I certainly wouldn't call this horror.  I didn't much care for it either.  A story of power, reincarnation, love and .... catfish.  (1/5)

5. Marke Ingestre: The Customer's Tale by Robert Aickman - One will need to be familiar with a famous story to get this one.  I was, sort of, but had to look it up to be sure.  Not that great.  (2/5)

6. Where the Summer Ends by Karl Edward Wagner - This is a longer story than the others so far.  It's a silly story really that builds up to its shock ending.  A few people live in a slum area, and the story feels to be taking place in the future, where an ornamental grass has run wild and is taking over vacant lots, fields, etc. Didn't do it for me. (2.5/5)

7. The Bingo Master by Joyce Carol Oates - Oates is a fine writer and this is the best story in the collection so far but I would not call it horror by any means, perhaps noir or Gothic.  A 39-year old spinster walks into a bingo hall determined to lose her virginity that evening.  This is a story of identity; we cannot pretend to be who we are not without consequence and others may not be whom they appear to be.  The story continuously shifts and didn't end how I thought it would, even after I'd changed my opinion.  (4/5)

8. Children of the Kingdom by T.E.D. Klein - Now we come to the first novella in the collection.  This was a nice long story that I really enjoyed and it clearly fit the horror genre.  I've never heard of this author before and will have to look him? up. A man puts his grandfather into a seniors manor in the city after he's had a minor stroke but no longer able to live on his own.  He goes to visit him each week and finds that the gf has taken to spending his days in the neighbourhood on some steps with a large black woman and an old retired Costa Rican priest.  It takes a very long time before anything creepy happens in the story but every now and then we get a hint at what that might possibly be.  I won't say more as the enjoyment is in seeing the story unfold.  (5/5)

9. The Detective of Dreams by Gene Wolfe - I just didn't get this.  I was interrupted and had to read it in two sittings, maybe that had something to do with it.  However, minutes after finishing, I haven't a clue what it was about. (1/5)

10. Vengeance Is by Theodore Sturgeon - A short but intense story told in two voices about an incident that has already happened.  A brutal rape and the effect it had on both the victims and the violators.  (4/5)

11. The Brood by Ramsey Campbell - I was looking forward to this one as I've wanted to read this author and I wasn't disappointed.  Pure horror.  A man watches an old woman lingering about on the street from his bedroom window in the early evening; she often lures stray animals to her dilapidated home.  When she disappears, being a vet, he is concerned more about what may have become of the animals and investigates.  Creeeeeepy!  (5/5)

12. The Whistling Well by Clifford D. Simak - I've read several shorts by Simak now and am very fond of his work.  This one was no exception.  A paleontologist author is summoned by his ancient auntie to write a family history for her of one particular line before she dies and offers to pay him handsomely.  He ends up on the land the first settler in the New World purchased and finds something older than the dinosaurs.  Engrossing.  (5/5)

13. The Peculiar Demesne by Russell Kirk - This isn't a long story but it absolutely bored me to death.  My mind kept wandering and I didn't finish it.  Never had that happen in a short story collection before! (0/5)

14. Where The Stones Grow by Lisa Tuttle - Very short, creepy story of a man who remembers back when he was 8 and found his father dead in the middle of some standing stones when they visited England. (3/5)

15. The Night Before Christmas by Robert Bloch - This is good horror.  I've read plenty of Bloch's stories and this one was great.  An artist is hired to paint the portrait of a rich oil man's beautiful younger wife.  He goes away on business and yes, the obvious happens, but the tension mounts and the ending is a doozy! (5/5)

16. The Stupid Joke by Edward Gorey - This is just an illustrated poem and there's not much more to say than: It's Edward Gorey!.  (4/5)

17. A Touch of Petulance by Ray Bradbury - A young man, married only a year, meets himself twenty years older on the train.  His older self has come to tell him he has just killed his wife.  Not bad.  (3/5)

18. Lindsay and the Red City Blues by Joe Haldeman - Hmm. Certainly a devilish tale.  A man goes to Morroco and enters the marrakesh with a shady guide thus embarking on a journey into the strange and occult.  Weird tale, but the man is such a scumbag it isn't very "horrifying" to see him get his just deserts. (3/5)

19. A Garden of Blackred Roses by Charles L. Grant - This is divided into parts which are about completely different people and seems confusing at first but the episodes are connected by the evil.  At first we think the evil is coming from one thing but each episode reveals more of the evil's true nature.  Really liked this.  Had a kind of fantasy feel to it as well.  (5/5)

20. Owls Hoot in the Daytime by Manly Wade Wellman - A modern story of a man walking across country with his guitar who comes across a man one night who tells him not to go near a certain cave.  He realises the other man is a dwarf and he spends the night by the campfire with him and learns a tale few get to learn themselves. (3/5

21. Where There's a Will by Richard Matheson & Richard Christian Matheson - This is about one of the things that I find the most scariest.  A man wakes up to find himself trapped inside a casket.  Shocker ending. (5/5)

22. Traps by Gahan Wilson - An old woman calls in an exterminator for a terrible case of rats.  Not bad. (3/5)

After the stories is an afterword by the editor Kirby McCauley on his thoughts on the 25th anniversary edition of this collection.  Then follows an interview with him. And finally collected as a group are the original pre-story blurbs from the 1980 edition that introduced the authors and their following contribution.  Add to this the original 1980 preface that describes how the book came to be, there is a lot of interesting reading for the horror aficionado apart from just the literature itself.