49. BOOK TOUR: Then Like the Blind Man: Orbie's Story by Freddie Owens 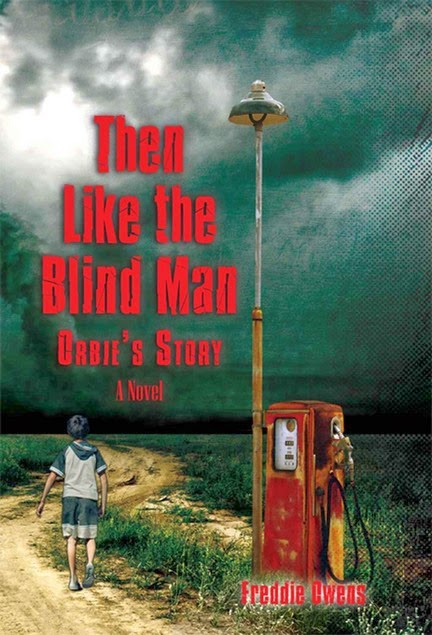 BOOK TOUR: Then Like the Blind Man: Orbie's Story by Freddie Owens (buy)

"Nine-year-old Orbie has his cross to bear. After the death of his father, his mother Ruby has off and married his father’s coworker and friend Victor, a slick-talking man with a snake tattoo. Now, Orbie, his sister Missy, and his mother haven’t had a peaceful moment with the heavy-drinking new man of the house. Orbie hates his stepfather more than he can stand; a fact that lands him at his grandparents’ place in Harlan’s Crossroads, Kentucky.

Orbie grudgingly adjusts to life with his doting Granny and carping Granpaw, who are a bit too keen on their black neighbors for Orbie’s taste, not to mention their Pentecostal congregation of snake handlers. And, when he meets the black Choctaw preacher, Moses Mashbone, he learns of powers that might uncover the true cause of his father's death. As a storm of unusual magnitude descends, Orbie happens upon the solution to a paradox at once magical and ordinary. Question is, will it be enough?."

Received a review copy from the author.
Book tour courtesy of Pump Up Your Book

This was a complete joy to read and one of my favourite "types" of stories.  A book about boyhood in Kentucky during the 1950s.  Coming of age, southern fiction, historical fiction, racial relations: all "genres" that appeal to me and nothing better than to find them altogether in one well-written book.  Not too soon before I started this book I had finished "Little Joe" by Michael E. Glasscock III and it felt like this was going to be the same kind of book, and it was, generally speaking, but Orbie's Story is so much more raw, real and explores the nasty side of people and the old maxim that "what doesn't kills us makes us stronger".  For 9yo Orbie, his grandparents, his mother and his 5yo sister live a hardscrabble life, meet with opposition because they don't hold with the segregated south's proprieties and for Ruby, the mother, abuse from her second husband.  As the story progresses a dangerous mystery is exposed and not only is house, home and livelihood threatened but their very lives.  Owens sets us down into segregated 1950s Kentucky with no holds barred, the language is rough, the racism is rampant and ugly but Orbie is a little boy wise beyond his years who catches glimpses of his elders motives for what they truly are.  An added magical realism element comes with an enigmatic black snake-handler preacher man, who frequently disappears for long periods of time.  He recognises the power in Orbie and Orbie feels its strength.  The book also deals with a Christian message, one at cross purposes with itself at times as true believers, hypocritical believers and non-believers live either together or in close proximity with each other.  I truly enjoyed the people and world Mr. Owens immersed me in.  I had one problem and that was that the book meandered without a decisive plot, not much happens in the grand scheme of things.  I do like character driven novels, am one of those people who do enjoy a good book where nothing happens but here there is always a feeling that something is going to happen or did happen that nobody knows about and there is that expectation for the reader that never comes to fruition.  At least until the final 75 pages or so,  then the tension mounts, the book reads faster and we are rewarded with that something we expected after all.
Labels: 2012 historical fiction magical realism racism southern fiction