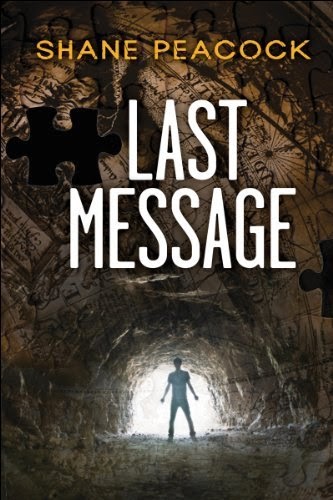 "Adam has a good life in Buffalo: great parents, a cute girlfriend, adequate grades. He's not the best at anything, but he's not the worst either. He secretly lusts after Vanessa, the hottest girl in school, and when his dead grandfather's will stipulates that he go on a mission to France, Adam figures he might just have a chance to impress Vanessa and change his life from good to great. When he gets to France, he discovers he has not one but three near-impossible tasks before him. He also discovers a dark and shameful episode from his grandfather's past, something Adam is supposed to make amends for. But how can he do that when he barely speaks the language and his tasks become more and more dangerous? Despite the odds, Adam finds a way to fulfill his grandfather's wishes and, in the process, become worthy of bearing his name."

This is the final book I read in the Seven series.  The series' great claim is that the books do not have to be read in any specific order and I ended up with this one because Peacock was my favourite author from the seven presented.  This was a satisfying book for me to end with, but generally it would not have mattered when I had read it throughout the series as it has no connection with the other stories.  This is one of a handful of the books that delves deeply into the Grandfather's adventure quests for the grandson's, the Grandfather's past and brings another dimension to his personality which we have gradually gleaned from some of the books.  This is the most dangerous quest any of the boys have been sent upon, they seem rather grandiose and could be life-threatening, if not illegal.  Making for an adventurous read though.  I had high hopes for this volume, what with Peacock as the author, but he strays from his usual writing style somewhat and while I enjoyed it immensely this is no "Boy Sherlock Holmes" nor did it become my favourite book of the Seven series.

A few words on the series Seven as a whole: Kudos to my favourite book which ended up being Devil's Pass by Sigmund Brouwer with Jump Cut by Ted Staunton following up as close second favourite.  Overall, as a series,  I found Seven successful.  Of course, with each book authored by a different person, some were better than others, but as a whole very satisfying.  The ability to read the books in any order is unique and I enjoyed the experiment of randomly picking the reading order based on whatever criteria I felt would make a next good book.  I think a person's personal experience will be slightly different by the order the books are read in, but it will not dampen the level of enjoyment of the series as a whole.  The books have an overall related theme but are each an individual story not connected to the others, the only difference here is that I would read  Ink Me by Richard Scrimger and Jump Cut by Ted Staunton one after the other as events in one are connected to the events in the other, but which comes first doesn't matter.  Just a little advice from a reader.  Not necessary to follow:-)

FANTASTIC NEWS: In October 2014, the same 7 authors will return with The Seven Sequels:

"New secrets will be brought to light…

When a visit to their grandfather’s cottage leads to the astonishing discovery of a hidden cache of passports and foreign currency, the grandsons from the bestselling Seven (the series) begin to suspect that their beloved grandfather was a spy, or even worse, a double agent. Determined to unearth the true story of their grandfather’s mysterious past, the seven cousins set off on seven new adventures that will take readers from the depths of the Caribbean sea to the top of the London Eye.

Read One. Read them all. YOU choose the order."