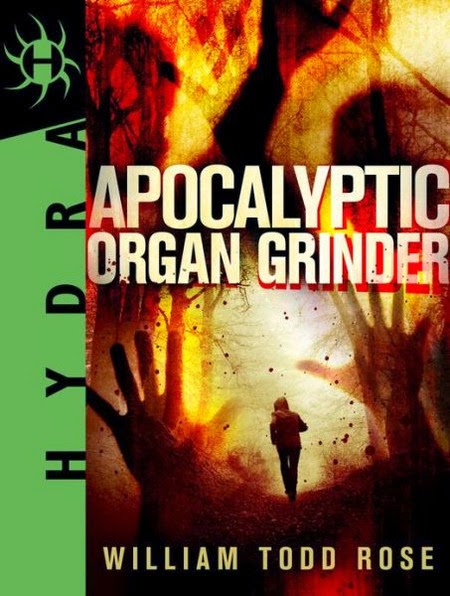 "William Todd Rose reinvents the zombie story with a thrilling novella of a post-apocalyptic America where saviors are heroes … and heroes are killers.

A fatal virus—a biowarfare experiment unleashed on an unsuspecting world—has reduced the once-mighty United States to a smattering of tribes duelling for survival in the lawless wilderness. The disease-free folk known as Settlers barricade themselves in small villages, determined to keep out the highly contagious Spewers—infected humans who cannot die from the virus but spread the seeds of death from the festering blisters that cover their bodies.

Tanner Kline is a trained Sweeper, sworn to exterminate Spewers roaming the no-man’s-land surrounding his frightened community. As all Settlers do, Tanner dismisses them as little more than savages—until he meets his match in Spewer protector Lila. But when hunter and hunted clash, their bloody tango ignites a firestorm of fear and hatred. Now, no one is safe from the juggernaut of terror that rages unchecked, and the fate of humanity hangs on questions with no answers: Who’s right, who’s wrong … and who’s going to care if everyone’s dead?"

At only 86 pages this is an intense novella, with chapter breaks, focusing on characteristics and feelings of two differing post-apocalyptic species and certain members.  A typical hypothesis that I enjoy with post-apocalyptic novels: the evil virus that wipes out the population, at least most of it. The lucky ones die, the not so lucky ones live and the least fortunate ones become something mutated, less than human. Rose brings a unique vision to the table here though that makes for some fast paced, heart-pounding, sickening feelings and a reader looking for a moral high ground can not find one.  Written in alternating viewpoints, first from a man who is a Sweeper. His job is to keep the settlements clean from the remaining infected ones who carry the disease, show all symptoms of it, but it does not kill them, though they still are highly infectious.  These people are wild vermin who must be exterminated before they can infect the last of the pure human race left.

The other view is from an infected female warrior leader, a Spewer, covered in huge boil like lesions which fill with puss and burst frequently spewing the infectious swill wherever it lands.  The Spewers may have the disease but it is only a condition to them not life-threatening.  They live their lives in tribes, hunting, gathering and staying away from Sweepers who will randomly come out and shoot and kill them on sight.  The Spewers are an intellectual society, with a religious and moral order that they follow before making any decisions, while the "clean faces" think them savage and unable of reasonable thought.

Yet, each side is driven by pure fear for the very existence of their own people, they each become just as vile and torturously murderous as the other.  These Spewers can be compared to the zombie but they are much more intelligent and dangerous.  The unaffected humans are too scared and fearful to put forth any kind of harmony agreement.  While reading the story, both main characters were ethically repulsive to me  but I did waver between having more concern for one than the other back and forth through the story.  Until the end.  Righteously so, at the end of life one can only get back what one freely gave away to others.  The end is a fitting one and stunning.  Will look for this author again!
Labels: 2013 horror post-apocalypse science fiction zombies