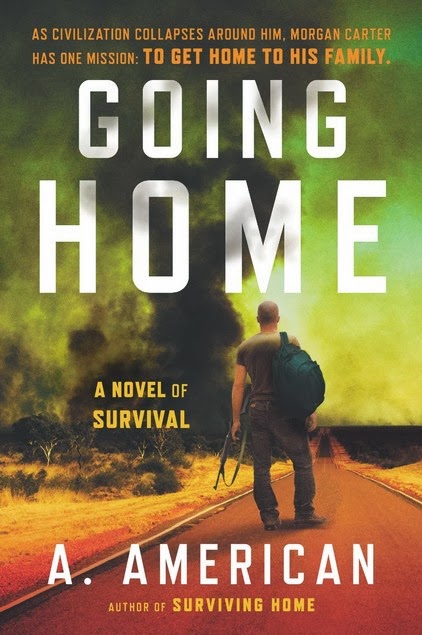 Going Home by A. American (buy)
The Survivalist Series: 1

"If society collapsed, could you survive?

When Morgan Carter’s car breaks down 250 miles from his home, he figures his weekend plans are ruined. But things are about to get much, much worse: the country’s power grid has collapsed. There is no electricity, no running water, no Internet, and no way to know when normalcy will be restored—if it ever will be. An avid survivalist, Morgan takes to the road with his prepper pack on his back.

During the grueling trek from Tallahassee to his home in Lake County, chaos threatens his every step but Morgan is hell-bent on getting home to his wife and daughters—and he’ll do whatever it takes to make that happen. "

Whoa, just going to azon to check the pubdate on this and wow, what a diverse reaction in the reviews!  It's got a strong 4 star rating with close to 800 reviews at this point in time so do I need to add another review, not really, but my impression anyway :-) This is a cross between post-apocalyptic and survivalist fiction.  The end of the world as we knew it as experienced by a few preparedness/survivalist/gung-ho/ex-military types and their families.  Nothing wrong with that!  Sounded interesting to me but a bit different from the usual dystopian post apocalypse novel being turned out today.  The scariness comes in knowing that these events and the way people in general react to them are realistic.  This could happen.  This is definitely aimed at men, whatever the opposite of chick lit is, that's what this is, barely a female present and testosterone oozing from the pages.  I haven't read anything like it since back in the day when I sampled a couple of Mack Bolan (The Executioner) books LOL  This read like an action movie for me; I could visualize it as it happened.  Lots of action and violence.  I mean the main guy kills three people before the book's barely started and they were "justifiable".  All the good guys kill bad guys all over the place and they are always "justifiable".  Really over the top, action hero movie violence.  If this was a serious book, these actions would be deplorable but set within this fictional world it was a lot of fun. I didn't like either of the young men who were trying to get back to their wives and kids but Sarge was a mean old coot with a heart in their somewhere and he's the only character I actually liked.  Anyway, this is one of those books, I'll say I loved, not for any literary merit but simply because it gave me an adrenaline rush and it was fun.  I have the second book on my Kindle and will be reading it soon.
Labels: 2013 apocalyptic post-apocalypse survival