66. The Trial of Dr. Kate by Michael E Glasscock III 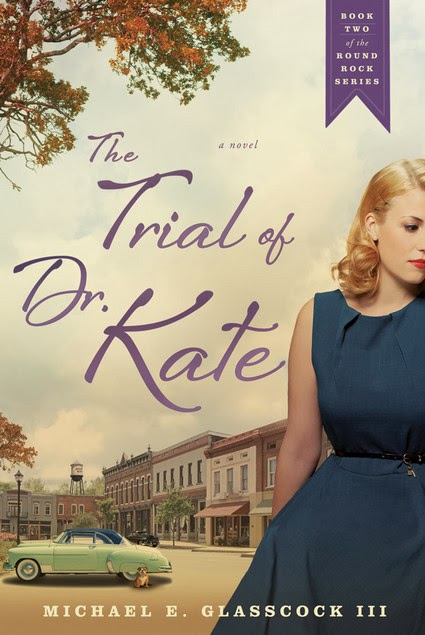 "In the summer of 1952, Lillian Johnson was found dead in her home, slumped in the wheelchair that had become her cage due to multiple sclerosis. An overdose of barbiturate had triggered a heart attack, but the scene was not quite right. It looked as though someone other than Lillian herself had injected the fatal dose.

Dr. Kate Marlow, Lillian’s physician and best friend, now sits in the Round Rock city jail. The only country doctor for miles, Kate cannot remember her whereabouts at the time of Lillian’s death⎯and the small Tennessee town buzzes with judgment.

As Dr. Kate’s trial approaches, another woman is determined to uncover the truth about the night of Lillian’s death. Memphis reporter Shenandoah Coleman grew up in Round Rock on the wrong side of the tracks, but unlike the rest of her unsavory clan, escaped her destiny. Now, back in the town she grew up in, she’ll have to turn every stone to keep Kate from a guilty verdict.

The Trial of Dr. Kate is the second novel in a four-part series from Michael E. Glasscock III that explores the intricate social cloth of Round Rock, Tennessee. Though each story stands alone, readers who enjoyed Glasscock’s first Round Rock tale, Little Joe, will delight in the cameo appearances in this one. "

This book is a sequel to "Little Joe" but not a direct sequel; it is set in the same town about ten years later.  A few of the characters from "Joe" either make cameo appearances or are mentioned and supposedly Kate is mentioned briefly in "Joe", though I don't recall the occasion.  I don't think it would matter which of these you read first as they are companion books rather than true sequels, though chronologically this also comes second.  I enjoyed "Little Joe" much more than "Dr. Kate" but I still found this a light, entertaining read with characters I loved.  The 1950s segregated Tennessee southern fiction story involving a murder mystery was a mixture of genres I adore to read so I fell right into the feel of the book.  I fell in love with Round Rock in book 1 and enjoyed the visiting the familiar landmarks, even if the characters were different.  There are two mysteries going on actually, one of course, is the trial, who killed Lillian? but secondly Shenandoah, the main character of this volume is being harassed by a Ford truck while on the roads.  Who is trying to kill her?  I found the answer to the truck mystery rapped up too matter of fact in an unbelievable way, but then was also disappointed because the end of the entire book ended up too realistically for me.  I'm a sucker for books that don't have happy endings; but I'll say the outcome of this one did surprise me.  Overall, a good book, I enjoyed it.  Not up to par with Little Joe, but I see how the events of these first two books will provide a background for the next book which will be about one of the Coleman's, Jamie, Kate's dad. I'm really looking forward to the Coleman book!
Labels: 2013 historical fiction mystery realistic fiction southern fiction