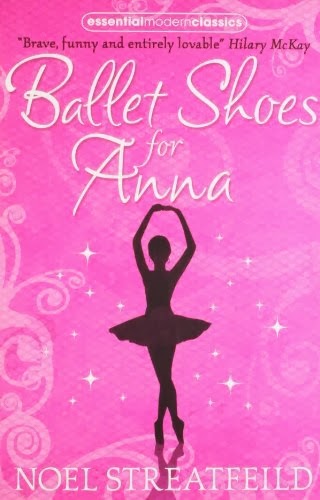 "For Anna, everything takes second place to her burning desire to dance. Even the earthquake that destroyed her Turkish home has not made her think differently, only now she's stuck in a prim suburban household with an uncle who "doesn't approve" of dancing. What can Anna do? Not only is there no one to give her lessons, but there's no money for them either, and, anyway, dancing's forbidden. Will she ever become the ballerina she longs to be? "

Purchased a secondhand copy at a thrift store.
Received a review copy from HarperCollins Canada.

Melodrama!  Oh, the poor, poor orphans!  This isn't quite up to par with Streatfeild's best writing but is still a decent, if over dramatic, tale of orphans who overcome tragedy.  Having lived a gypsy-type life with their Polish mother and British father, who ran away from his stiff upper-lip family to pursue a career as a painter, three children are devastated when all their living European relatives are killed in an earthquake in Turkey.  Rescued by a British Lord, they are taken to live with the father's brother.  The Uncle is a pompous bore, who hates children and only tolerates them for the sake of appearances, The Aunt is kind but she is terrified as a mouse of her husband.  Of course, life in England is miserable for them, especially since the girl had been about to go off for serious ballet lessons when the tragedy struck, her Polish grandfather, a famous Ballet instructor, having taught her all he knew. The Uncle thinks any kind of dance is the work of the devil and forbids them to even mention it again.  The children find ways around this and persevere making sure Anna gets some sort of lessons locally, but the boys have trouble raising money and Gus is prone to the shenanigans of The Gang.  Written as a tragedy, the children's lives become more and more miserable, though they manage to find happiness in the fact that they at least have each other, until at last the worst may happen then ta dah ... the orphans are rescued again.  I grew up on Streatfield and love her books, and enjoyed reading this one again.  Though certainly not one of her best, a fun lark for those who like orphan stories.

I actually read from two copies of this book as I have two editions I really like and don't want to give up either.  First is the HarperCollins "Essential Modern Classics" edition, books from this line start with a short essay from another children's author on "Why You'll Love This Book".  This essay is an introduction written by Hilary McKay.  Then these books always end with some sort of appropriate back matter relating to the book.  As in my previous reviewed "White Boots" from the same line, the Streatfield books end with a note from her nephew, William Streatfield who reminisces about his aunt and something pertaining to either the writing of or the theme of the book in hand.  This new editions is, unfortunately, not illustrated.  This is why I also kept on hand my battered little Lions paperback (only 50p) so I could read the story and enjoy the illustrations at the same time, though Mary Dinsdale produces some rather scribbled sketches.
Labels: 1972 2010 children classic MG orphans realistic fiction