52. Stiff: The Curious Lives of Human Cadavers by Mary Roach 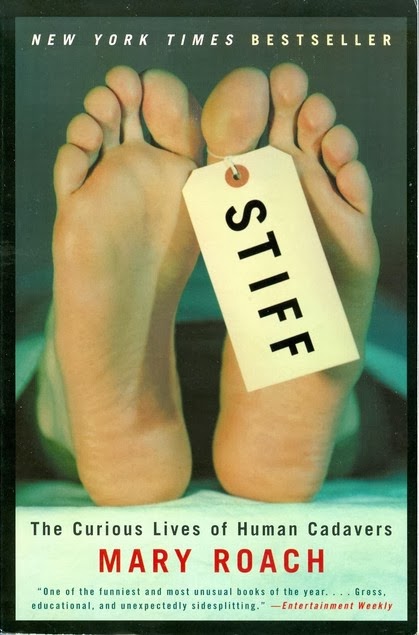 "Stiff is an oddly compelling, often hilarious exploration of the strange lives of our bodies postmortem. For two thousand years, cadavers—some willingly, some unwittingly—have been involved in science's boldest strides and weirdest undertakings. In this fascinating account, Mary Roach visits the good deeds of cadavers over the centuries and tells the engrossing story of our bodies when we are no longer with them."

This is one of those books that I've wanted to read for a long time and had high expectations.  I am well-read on the subject matter, it's one of my special interests, however I come to this topic with a Catholic worldview and that is where my review will differ from the average one.  First off, when one has such high expectations for a book so highly lauded it's not surprising I was a bit let down.  Mostly on the humour side.  I have a dry sense of humour, not easily offended but I didn't find this "uproariously funny" like Publisher's Weekly did.  Some of the humour made me chuckle but a lot of it fell flat, was full of puns (uck) and just not my type.  I wouldn't read any of her other books unless the subject matter fascinated me and so far none of the others do.  Anyway,  humour aside, I found the book entirely captivating.  Starting out historically I was in familiar territory and then topics became more modern describing their history up to expected new future advances.  I enjoyed most the history; that is where my own special interests lie especially during the Victorian period.  Next, I'm interested in forensics and really enjoyed the chapters on the body farm, airplane crashes and crash test specimens.  At chapter 8 I became uncomfortable with the topic of brain death and organ donation because the author allowed her own moral opinion to flavour the discussion, something she hadn't done up to this point.  The Catholic Church excepts brain death, as do I, however my convictions do not hold with taking organs from a breathing body that needs to be anaesthetised.  But Roach uses this chapter to express her firm opinion otherwise and in her punny way calls the 54% of us (her statistic) who would not donate organs from a supposedly "brain dead" loved one, "heartless".  It's preferable not to insult your reader; otherwise she was very respectful towards death, dignity and religion throughout.  I found the chapter on the future ways of disposing of remains quite interesting.  She presents two ways that may become popular: composting (which would not be accepted by my religion) and tissue reduction (which would be acceptable with the dehydration option).  If this last process, which results in remains similar to cremations, is cheaper and involves less funerary pomp then I'm quite interested in it.  An honourable and respectful funeral mass and internment is needed for the deceased (according to my religion) but fancy, expensive, funerary finery is nothing but a burden on the living.  Certainly an interesting book but I think I'm at the point now where I need to look at the texts she used for research and read those types of books myself now, since this is a subject I'm actually interested in scholarly.
Labels: 2003 forensics medicine non-fiction science