37. The Kept by James Scott 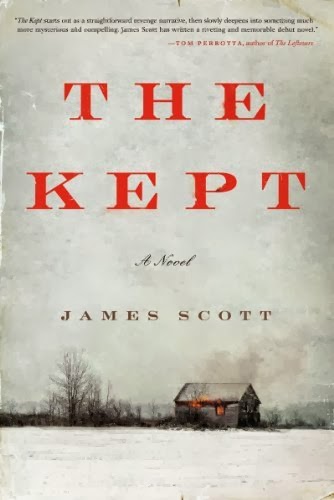 The Kept by James Scott (buy)

"In the winter of 1897, Elspeth Howell treks across miles of snow and ice to the isolated farmstead in upstate New York where she and her husband have raised their five children. Her midwife's salary is tucked into the toes of her boots, and her pack is full of gifts for her family. But as she crests the final hill, and sees her darkened house and a smokeless chimney, immediately she knows that an unthinkable crime has destroyed the life she so carefully built.

Her lone comfort is her twelve-year-old son, Caleb, who joins her in mourning the tragedy and planning its reprisal. Their long journey leads them to a rough-hewn lake town, defined by the violence both of its landscape and of its inhabitants. There Caleb is forced into a brutal adulthood, as he slowly discovers truths about his family he never suspected, and Elspeth must confront the terrible urges and unceasing temptations that have haunted her for years. Throughout it all, the love between mother and son serves as the only shield against a merciless world."

Received an egalley from the publisher through Edelweiss.

This book had me transfixed from beginning to end.  I found it a slow read but I literally had to force myself to put it down each night and did actually fall asleep reading as it just got too darn late.  Set in 1897, up-state New York, an amazing opening scene grabbed me and had me hooked that I knew right away this was going to be my kind of book.  What starts off as a tale of vengeance ends up one of redemption.  Caleb, a 12 year old boy, is always the main character and he pulled my heart strings from the get go.  I have a 13 year old son and was able to compare and contrast the difference in the times but still be aware of the innate mindset of twelve years of age.  Very shortly after the book starts it is often hard to remember that Caleb is only 12 and I often started thinking of him as 16 or so; the author seems to be allowing the reader to do so by only very infrequently bringing back a mention of his real age which throws the reader for a loop reminding themselves of this and what this boy is being asked to do and how he is coping with the situation.  Much further on in the book, things change and we are constantly reminded of his age and there is purpose to this as well.  Elspeth, the mother, is an unlikable character but one grows to understand her, wonder at a woman's lot in this era where no psychiatric help was available, where it was the woman's fault if no children were born, and if a baby girl came first she was told to have a boy next time.  Elpseth is responsible for her own actions though and by tale's end redemption is all she can, and does, ask for.  I loved this book.  It was atmospheric, dark, moody, and well-written.  However, as soon as I finished the book I knew it would get mixed reviews and even some bad reviews.  Some readers can't stand dark stories that don't have happy endings.  Personally, I think if a soul finds redemption, that *is* a good ending.  If you want happily ever after, this is not the book for you!  If you want profound beautiful writing that tells a tale about life's sorrows and redemption you'll like this book.  James Scott is a name I will be looking for in the future.
Labels: 2014 historical fiction mystery thriller Victorian