9. The Boy Who Swam with Piranhas by David Almond 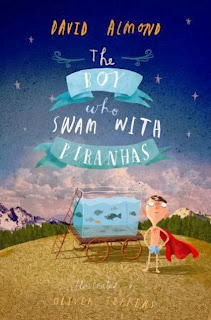 The Boy Who Swam with Piranhas by David Almond. Illustrated by Oliver Jeffers (buy)

"Stanley Potts’s uncle Ernie has developed an over-the-top fascination with canning fish in the house, and life at 69 Fish Quay Lane has turned barmy. But there’s darkness in the madness, and when Uncle Ernie’s obsession takes an unexpectedly cruel turn, Stan has no choice but to leave. As he journeys away from the life he’s always known, he mingles with a carnival full of eccentric characters and meets the legendary Pancho Pirelli, the man who swims in a tank full of perilous piranhas. Will Stan be bold enough to dive in the churning waters himself and choose his own destiny?."

Received an egalley from Netgalley.

I enjoy David Almond very much and while I've only read a handful of his books to date; I've found them to share themes of death/grief and either father/mother to child relationship.  So I looked forward to this one though I hadn't heard anything about it beforehand.  The book is much lighter than the previous books I've read by the author and while I still find the same themes present it is only in a smaller way.  The book starts with a boy being orphaned quite horrifically and then going to live with an aunt and uncle who, obviously love him, but he's treated with neglect and the uncle is near abusive.  This is all kept in a high over the top humorous manner with the entrance of the DAFT Squad who investigates all suspicious goings on.  The second half of the book has Stanley running off with the circus, an age-old dream of childhood. (though I think it went out with not Almond's but perhaps my own generation).  The story is hilarious and like all of Almond's works, very British.  Candlewick publishes the US editions but they don't Americanize the text, so you get a very big dose of crazy, off the wall British humour.  While the book holds many characters, Stanley is the one the reader gets to know the best and watching out for his welfare and caring about what happens to him enhances the reading experience.  The bad guys get theirs in the end and each character receives their own kind of redemption for a satisfying and (funny) ending.
Labels: 2013 humour MG