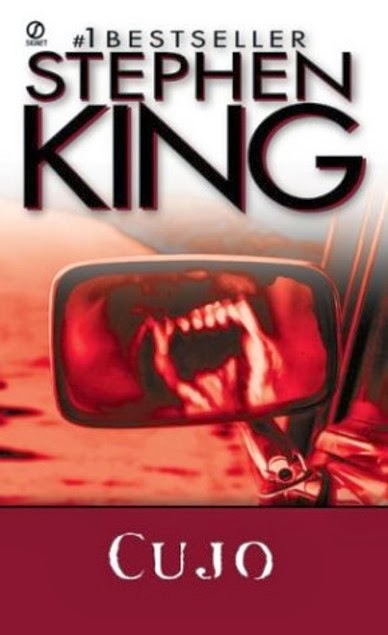 "Outside a peaceful town in central Maine, a monster is waiting. Cujo is a two-hundred-pound Saint Bernard, the best friend Brett Camber has every had. One day Cujo chases a rabbit into a bolt-hole - a cave inhabited by sick bats. What happens to Cujo, how he becomes a horrifying vortex inexorably drawing in all the people around him makes for one of the most heart-stopping novels Stephen King has written.."

I am (re)reading Stephen King's works in chronological order and this re-read was up next for me.  I originally read the book when it was first published in 1981 making me 13yo.  It made a big impression on me at the time and I was quite shocked it ended the way it did.  The change in the movie ending infuriated me.  Re-reading it all these years later, I don't find it anywhere near as good as what King had written to this point, though better than Firestarter.  Cujo is a short book compared to the other's but longer than Carrie.  I had thought this was going to be pure realistic horror but had forgotten about the boogieman element.  King goes about playing this realistic, frighteningly possible story of a rabid dog wandering in a rural backwoods area while adding in just a touch of the paranormal which we could believe is imagination on the part of the participants but King won't let us off that easily.  Cujo has a small cast of characters and King does something different here for the first time (disregarding the Bachman books) by spending a lot of time on character development of the main handful of major players.  There is not even any threat until well over 100 pages in which is 1/3 of the book.  King also chooses to write from the dog's point of view occasionally; this is a tricky thing to do and pull off well.  But The King does it!  Cujo's thoughts come much less frequently than any others, and his passages are always short lending great credibility and success to Cujo never becoming personified.  He is always an animal, even though the reader is party to his brief canine thoughts.  A good quick read.  Classic King, but I'd call this a turning point from  his work to date so far, more of a psychological thriller than horror; but still horror in a more real sense than in actually being scary or creepy.

Now as I'm reading through the books, I'm also looking for the connections to the previous books in the big Stephen King Universe and this one is easy.  Taking place in Castle Rock, right after the events of The Dead Zone, our new family moves into the house owned by the killer in DZ.  This killer (I won't say who it is) and the case which forms the first half of DZ are referred to frequently in Cujo.  Finally, Sheriff Bannerman from DZ is a character in both books.  I didn't pick up on anything else.