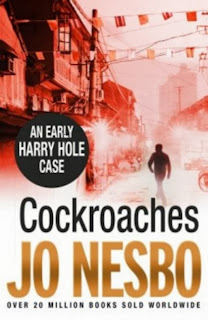 "The thrilling sequel to Jo Nesbo's debut novel, The Bat, Cockroaches sees Harry Hole sent to Bangkok to investigate the murder of the Norwegian ambassador.

Detective Harry Hole arrives in a steaming hot Bangkok. But it's work, not pleasure. The Norwegian ambassador has been found dead in a seedy motel room, and no witnesses have come forward. The ambassador had close ties to the Norwegian prime minister, and to avoid a scandal Harry is sent there to hush up the case. But he quickly discovers that there is much more going on behind the scenes and very few people willing to talk. When Harry lays hands on some CCTV footage that will help him unravel what happened that night, things only get more complicated. The man who gave him the tape goes missing, and Harry realises that failing to solve a murder case is by no means the only danger in Bangkok.."

I loved this book and wanted to give it a 5* but having last read Harry Hole #10 I know they get even way better, so have to keep this to a 4*.  Harry is in Thailand this time; he's been sent there to take care of a potentially embarrassing situation where the married Norwegian ambassador has been found murdered in a brothel/hotel.  Unknown to Harry, the alcoholic detective, has been sent to hush-hush and cover things up quietly, nobody expects him to actually solve the case.  But this is Harry Hole, he can smell a rat a mile away and is in full detective mode as soon as he sees the crime scene.  Great case, enjoyable characters, gives readers of the series the background finally on the Thailand connection for Harry and why he's always pulled back there.  I loved getting to know the early Harry, where his problems came from, how he was shaped, his problems with alcohol and opium.  This is the man who in the rest of the books fights these demons constantly.  I also finally understand why the publisher's skipped these first two books for English readers.  Here was the English speaking world becoming fascinated, addicted even, to Scandinavian mysteries and Jo Nesbo was a brilliant author to introduce us to but his first two Harry Hole books don't even take place in Scandinavia, first in Australia, second in Thailand.  They weren't the type of dark, cold, brooding Scandi-crime English readers were discovering and clamouring for.  So yeah, I finally get.  I loved The Bat more than Cockroaches but it was fun reading them in retrospect from the point of view of someone who already knows the character.  Newcomers to the series should keep in mind that the scandi-crime aspect is coming and let these first two books introduce you to Nesbo's pacing, and fantastic plotting.

Now, since I started this series sort of in the middle I have two more books to read which I've been holding onto so I could at least read them in order after these two first books.  So next up is Redbreast!
Labels: 2013 mysteries Scandi-crime thriller