19. The Outlaw Album by Daniel Woodrell 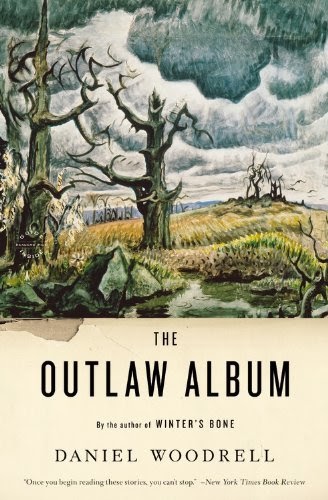 "Daniel Woodrell is able to lend uncanny logic to harsh, even criminal, behaviour in his wrenching first collection of short fiction. Desperation - both material and psychological - motivates his characters. A husband cruelly avenges the murder of his wife's pet; an injured rapist is cared for by a young girl, until she reaches breaking point; a disturbed veteran of Iraq is murdered for his erratic behaviour; an outsider's house is set on fire by an angry neighbour. There is also the tenderness and loyalty of the vulnerable in these stories - between spouses, parents and children, siblings and comrades in arms - which brings the troubled, sorely tested cast of characters to vivid, relatable life."


Withe the completion of this collection of short stories I have now read Woodrell's complete oeuvre. Being such an accomplished author of the short novel, I was looking forward to reading this collection of short stories thinking he would excel at this form as well.  I have to say I was somewhat disappointed overall.  On the whole, I found the stories to be okay.  Of the twelve I thought three were excellent, one I didn't like, leaving the rest simply in the generally "good" category.  One thing that did bother me was there was no copyright page for the stories, so I didn't know which were earlier works and which were newer.  An interesting piece was the inclusion of "Woe to Live On", obviously the short story that proceeded his novel of the same name.  Very good, the same as the novel but different as well.


1. The Echo of Neighborly Bones - An Ozark man kills his Minnesotan neighbor, a rude opinionated man.  He keeps going back to revisit and rekill the corpse while we learn of the Minnesotans affronts to the man.  It isn't until the end we learn the real reason he was killed.  Short, but mesmerising. (3/5)

2. Uncle - A woman and her daughter are abused by her (I guess dead) husband's evil brother.  He also takes lone tourist college girls floating down the river and rapes them.  One day the daughter hits him viciously over the head blaming it on his last victim and now she had a 200 lb baby in a wheelchair to look after.  This is creepy and where it heads and finishes is creepy too. (4/5)

3. Twin Forks - A fine story to read, haunting, but it's just weird.  An event occurs but it is more about the man's past, his feelings, his having a moment in life and choosing which "fork" in the road to take.  (3/5)

4. Florianne - Well this one is just kinda creepy.  Very short.  A father ruminates on his daughter's whereabouts, now 11 years since she went missing.  He imagines where she might be buried, suspects anyone might have raped and murdered her.  Everyone else thinks she ran off.  (3/5)

5. Black Step - This one is longer than the others so far.  It is the story of a young man back from one of the desert wars, waiting to hear if he can go back.  Told through his voice, it is a depressing tale of a depressing life in rural wherever.  Nothing happens but a world is created and surrounded by death everywhere, life goes on.  (4/5)

6. Night Stand - Another longer one dealing with PTSD in soldiers from Vietnam and Iraq.  A couple wakes up in bed one evening to find an intruder standing naked at the end of their bed growling.  The line is blurred as to who is the victim and who is the attacker and almost disappears as their similarities are revealed.  My favourite so far. (5/5)

7. Two Things - An obviously uneducated man is visited by a woman who tells him his incarcerated son has become an accomplished poet.  He's not impressed.  I agreed with him.  Short. (3/5)

8. The Horse in Our History - A black man goes to an ancestral town and asks questions of a relative who walked in front of a train in the sixties.  He gathers quite a collection of somewhat contradicting stories.  Loved the atmosphere and could have liked this to turn into a whole book.  But much too short to really feel anything for the characters as I'm finding in all these stories. (3/5)

9. Woe to Live On - I'm annoyed this collection doesn't give the dates the stories were first published but we'll have to assume this short story came before the novel.  I recall the events described here from reading the novel but they are sandwiched between an older Jake now in WWI days experiencing the fallout of his Civil War actions with his now grown up son and young grandsons.  The best story in the collection and I'll be surprised if I find any of the next ones better than this.  (5/5)

11. One United - Well now, this is rather haunting.  I'll be musing upon this to fully "get" it.  The story reveals itself piece by piece as it unfolds.  Funnily enough, it is narrated by a female, which doesn't become apparent for a bit.  She is related to the man, perhaps his daughter, and she is back home and well now.  He wants her to dress "decent" now, put on a polka dot dress he bought her, comb her hair and we don't know why she was not well; she could have come home from hospital but something kept me thinking it was psychiatric.  They go for a visit and as I say everything is revealed slowly.  (3/5)

12. Returning the River - Very good one to end the book with.  Short but meaningful.  Starts with an old man running through a field after his son who has just set the neighbour's house on fire.  A story of familial love.  (5/5)
Labels: 2013 short stories