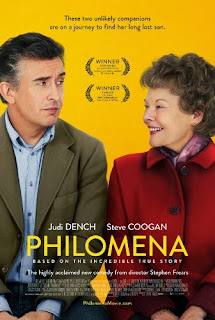 We actually went to see Catching Fire but there were only three seats left in the theatre so declined them and went to see this instead.  We just loved it.  A very positive Catholic movie.  Of course it deals with tragedy and how things were in orphanages during the fifties, not just Catholic ones but all of them really at that time and the plight of unwed mothers.  Judi Dench was brilliant as usual and her character's unwavering faith through all her hardships is a role model we can all only hope to aspire to ourselves.  The contrast between her and the bitter ex-Catholic was remarkable.  We both loved the film.  Stars: Judi Dench
Labels: 2013 biography catholic movie reviews