Captain Underpants Books 8 and 9! Grab Onto Your Waistband!

These are my last two Underpants reviews.  I've now read the whole series!  I'm really quite amazed I read this for my own enjoyment and had such a fun time with it.  Book #9 ends as if it is the end of the series but then announces that book 10 will be the last Captain Underpants.  After #10 we are left feeling the series is over but recent news brings us relief that books 11 & 12 will be forthcoming over the next two years, 2014 & 2015.  Tra-la-laaa! 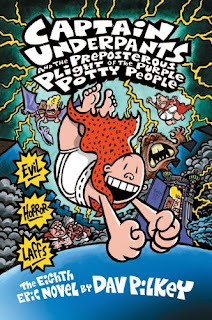 "When we last saw George and Harold, they were about to take their pet pterodactyl, Crackers, back to the Cretaceous period in the Purple Potty time machine. But things didn't work out quite as they had hoped. They've entered an absurd alternative reality where teachers are nice, kids are allowed to read banned books, and the cafeteria food doesn't smell like dirty diapers. even worse, they've discovered alternative versions of themselves-Evil George and Evil Harold- who plan to unleash some preposterous plans on Piqua, Ohio. Now, it's up to George and Harold to defeat the evil twins and THEIR superhero, Captain Blunderpants."

Dav Pilkey does it again!  He continues with his usual tropes as expected but like last book manages to keep them fresh; for instance the switching of letters on the sign doesn't happen until after the "before I tell that story I must tell this story" bit.  I love this book.  Pilkey is back in perfect form!  The kids go to an alternate world where everything in their lives is backwards.  Added to the story is their grandparents who accidentally drink the last of the super juice creating Boxer Boy and Great-Granny Girdle.  The whole book was laugh-out funny.  One of my favourites in the series.  Once again as has been happening in the last few books, the set up is made for the next book with the introduction of the arrival of the next villain who is the return of an old favourite! 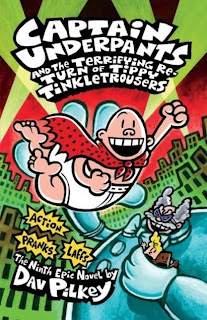 "When we last saw our heroes, George and Harold, they were under arrest and headed for prison. Then Harold foolishly uttered the fateful words "What could be worse than going to jail for the rest of our lives?" and changed the course of human history.

In this ninth epic novel, Dav Pilkey takes readers back in time to the carefree days of kindergarten, when the worst thing George and Harold had to face was NOT evil mad scientists or alien cafeteria ladies but a sixth-grade bully named Kipper Krupp, the nephew of their clueless school principal. And because George and Harold don't actually invent Captain Underpants until fourth grade, the two clever kindergartners are on their own -- using their brains to beat the bully."

Every Captain Underpants book is called an "epic novel", well, this time Pilkey has certainly presented fans with "the" Epic Captain Underpants novel.  It is huge for a start (over 300 pages) and the plot is so convoluted it contains about three stories in one!  This has got to be the best book in the entire series and I've already read book 10, but this one makes me want to read #10 again just to follow what happens next.  After six years between books 8 & 9 being published, Pilkey put everything he had into this book; it is absolutely hilarious.  Taking us into a future that was meant to be, a future that could have been and the one that really happened.  We also go way back to when George and Harold were in kindergarten and first met.  The majority of the book takes place within this storyline and is fantastic!  I just loved it!

Read my review of Book 10: Captain Underpants and the Revolting Revenge of the Radioactive Robo-Boxers.  This was actually the very first Cap. U. book I ever read!
Labels: 2006 2012 children humour MG superheroes